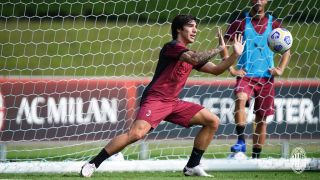 A devoted AC Milan fan kept his word after the Rossoneri signed Sandro Tonali by going on a big hike, which he said he would if the midfielder arrived.

Tonali completed his move from Brescia several days ago on the basis of an initial high-paid loan with Milan obtaining an option to sign the player outright at the end of the season for 15 million euros. This is considered a mere formality considering the amount the club paid for the loan (10 million euros).

According to La Provincia (via MilanNews) – a Crotone-based newspaper – lawyer Salvatore Zannino who is a big Rossoneri fan and vice president of the newborn Milan Club “Gennaro Gattuso” of Crotone made a promise to walk 15km if Milan signed Tonali.

When the signing was officially announced, he stuck to his word and began the journey on foot starting from the headquarters of the Milan Club of Crotone and arriving at the sanctuary of Capocolonna. The walk lasted about 3 hours in total.