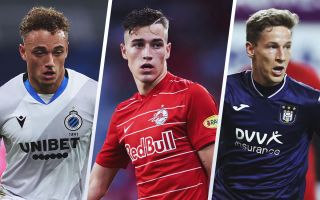 With the January transfer window somewhat fast approaching and Milan seemingly in a title race, some reinforcements will need to be made in the hopes of clinching some silverware this season.

Below is a list of five players including a RB Salzburg trio that the Rossoneri are keeping an eye on according to Calciomercato.com, maybe with the intention of a winter coup, or perhaps for a summer 2021 move. We will identify what these players can bring to Milan, their qualities and the possibility of these transfers happening.

A precocious winger who rose through the Ajax youth sector after leaving major rivals Feyenoord’s youth set-up at a young age. A Netherlands U21 international who already boasts a league title win with Ajax, a Belgian title win with his current club – Club Brugge – and a Dutch Super Cup as well as a few other trophies to his name.

What is more impressive is that in December 2019 he became the first player in over 60 years to score a hat-trick in an Ajax debut. Before moving on to his qualities and what he can bring to the Rossoneri, it is worth mentioning the player has a kind of ‘party-boy’ attitude that has followed him at both Ajax and Club Brugge.

However, with the likes of Zlatan, Giroud, Pioli and of course Maldini all possessing winning no-nonsense type demeanours, I am sure the 22-year-old won’t cause any issues if he were to sign.

Now in terms of ability and his specific qualities, he is a fast and very skilful winger predominately plying his trade on the left, Lang can also play on the right. This is something that Milan seem to want especially when considering Pioli’s dynamic shifting of our current wingers at times and with other targets such as Romain Faivre possessing a similar ability.

Interestingly, he has been recently likened to none other than Neymar on social media with his silky skills and seems to possess a very similar dribbling technique. His strengths lie in his ability to take a man on, run at defences and being able to get the ball quickly out of his feet and take a shot.

However, he does have some glaring weaknesses although they are certainly common especially of young players with a desire to score with every attempt on goal. The main weakness being his decision making, with Club Brugge this season he does possess 7 goal contributions already this season in only 10 games, but he could have had many more assists already if he didn’t try to go for goal every time.

It must be noted he is being courted by a few Premier League clubs also, most notably Arsenal and Leeds, so his performances and talent have not gone unnoticed. Currently valued at around €20m, however, Club Brugge have already said they want more like €40m to sell the player.

Ultimately, this one seems expensive and unlikely, although not impossible with the player fitting directly with Elliott’s player profile and when you consider Milan’s legendary Dutch lineage. Definitely a player to keep an eye on when the January window opens.

A 20-year-old attacking midfielder and soon to be an established USMNT player who can also function on ether side of the wing, Aaronson offers some interesting qualities that Milan could really utilise.

After fairly steady performances in the MLS since the 18/19 season, Aaronson started to make it clear that he deserved more attention, having 11 goal contributions (7 goals, 3 assists) during his two seasons in the MLS. This gained him European attention and he got a move to RB Salzburg the Austrian outfit which is part of the talent producing Red Bull sports group.

In Salzburg, in his first 6 months, the American made a major impact. In 26 games in all competitions, he has scored 7 and contributed 5 assists. Extremely dynamic and possessing a good basic technique, Aaronson has good pace and knows how to utilise both feet, even if he is predominantly right footed.

In addition, he possesses good shot power which allows him to be dangerous from medium to long distance, as well as taking corners. He is also able to find pockets of space often and with his mature footballing intelligence becomes a very difficult player to mark.

Unlike the aforementioned Lang he does not seem to suffer any external pressure, making the right choices and playing with the calm of a veteran while maintaining a very intense style of play. However, in terms of weaknesses, he needs to further strengthen physically and his slender body structure at the moment makes it hard for him to win shoulder-to-shoulder duels.

Overall Aaronson presents himself to be a player that is much more suited in terms of price whilst still being in the Elliott mould; this is a singing that Milan should seriously consider, even if it ends up being a profit driven one similar to the recently departed Hauge.

A very exciting prospect, Kjaergaard is a Danish attacking midfielder, capable also of playing on the right of midfield. He is one of the youngest players who starts most games for Salzburg only just turning 18 this summer.

A result of the Lyngby youth sector in his native Denmark he joined the explosive RB Salzburg at the tender age of 16 and has adapted well to the high-intense, counterattacking style of the Austrian club.

The player possesses a naturally strong and well-built physique while not being too bulky or stocky (a trait common with a lot of the new Scandinavian talent). Standing at 1.89m – he has a great engine and does a lot of running, has a good football brain, scores goals and creates chances.

Although still only 18, he has already featured multiple times for the Under-20 national team. In terms of weaknesses, it is difficult to see what they are at this stage as unlike is teammate Aaronson, who is more established and has played more in the Salzburg set up, so it is easier to rate his game.

Kjaergaard doesn’t seem to have any glaring weaknesses other than he hasn’t proven enough at the top level. However, he has bags of potential and yet another example of the stellar talent producing club Salzburg is turning into.

Like with all the players on this list, the player fits nicely within the Elliott mould and is valued currently at around 3 million. He could be a low risk, high reward type singing that Milan seem more and more accustomed and happy to complete.

Verschaeren is another client of Wasserman, the same agent who represents both Lang and Aaronson. Verscharen is another attacking midfielder and a result of the Anderlecht academy. He is also a Belgium U21 regular, who has already received the prestigious Belgian Young Player of the Year award.

Currently plying his trade for the senior Anderlecht side, he has the ability to play as a central midfielder, attacking midfielder, and right-winger and therefore would offer some fantastic versatility which we know Pioli is a massive fan of.

He is a two-footed technically gifted player, standing at 5’8 with a low centre of gravity giving him impressive agility and balance. This season already he has 4 goal contributions (2 goals and 2 assists) in 9 games and was mostly deployed as a central midfielder in these games.

This highlights his ability to affect games and really make an impact. He is able to whip the ball in with pace and accuracy off of both feet and has already been put on corner-taking duties for his club.

He is versatile with his movement, able to come short to get on the ball, drift wide to get into a crossing position or use his pace to run in behind and look for the through-ball. This makes him very difficult to mark as he can occupy multiple positions both centrally and in the channels.

He has even been compared to Eden Hazard his Belgium compatriot which is always a high level of praise for any young promising Belgian player.

However, he does have some apparent weaknesses, similar to those of Aaronson. Due to his stature and build he is lacking physically, and this can lead to loss of possession in difficult physical duels. Like Aaronson, this is an area he can improve on and something he can seek to build upon when he bulks up naturally the older, he gets.

Verschaeren is a really interesting profile and a player that can offer Milan a lot in terms of versatility and technical ability. Currently valued at around €10m (although Anderlecht will want more especially after witnessing the success of Saelemaekers) he is an achievable target who could come in either in the January window or in the summer and be ready to help Pioli and the rest of the boys right away.

Finally, is the last of the Salzburg trio in Sucic, a 19-year-old Croatian also capable of playing in central midfield and also on the right or left. A player actually from the Salzburg academy rather than the other two Salzburg targets on this list who have been developed at youth level from their respective native youth clubs.

As a result, he is very adapted to the Red Bull style of play, having been indoctrinated at a young age. Having already amassed two assists from the central midfield this season in 8 games for the Austrian club, it is evident he is capable of affecting play even when in a deep-lying distributive role.

More importantly and impressively, he already has a goal in this year’s Champions League with a coolly taken penalty kick against high-flyers Sevilla. This further shows his potential and ability to stay clam on the biggest stage at only 19. These are qualities that Milan are clearly looking out for.

In terms of his qualities and strengths he functions as a roaming central midfield player maker, possessing fantastic stamina, natural physical strength especially for his age and a good foundation of technical ability. What is more, is he has good passing range, fantastic vision and is capable of long-shot efforts and creative off-the-ball movements.

Lastly, in terms of strengths being a fairly tall player at 1.85m you would expect clunker dribbling, but he has exceptional dribbling technique which along with his physical presence is a deadly combo.

He does have one major weakness however, and that is footedness, only really having his desired effectiveness with his stronger left foot. However, strengthening a weaker foot can be improved upon, and being surrounded by such experienced players currently at Milan in, Zlatan and Giroud especially, they can teach him how to overcome/compensate for this shortcoming.

Sucic is another interesting profile for Milan to continue to monitor and mull over. He fits the mould of player recruitment and is clearly experienced in high-pressing modern styles of football, something that il Diavolo themselves are developing and emulating, therefore he could really prove to be a smart pick-up.

Overall, these five players represent not just good options and opportunities to bag the next superstar, or to turn profit in order to help fund bigger name signings for Milan. They also highlight as with the apparent success of Alexis Saelemaekers previously of Anderlecht, that leagues such as the Belgian and Austrian top divisions continue to be a fertile and sustainable environment in which to harvest some fantastic prospects.