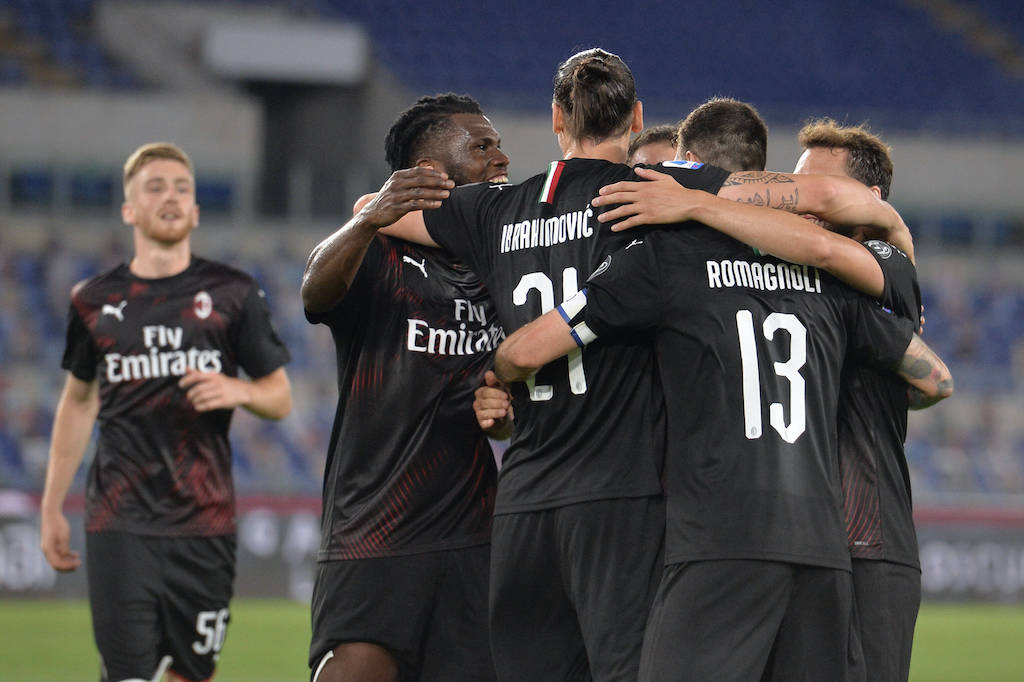 AC Milan inflicted a first home defeat of the season on Lazio on Saturday night, beating them 3-0 with an impressive performance.

The Rossoneri were dominant and professional from start to finish, controlling the game for large parts with an intense press and taking a deserved lead through Hakan Calhanoglu’s impressive strike.

Zlatan Ibrahimovic doubled it from the penalty spot before Ante Rebic was able to add a third in the second half, while a couple of simple late chances were missed that could have made the scoreline even more severe.

Stefano Pioli made five changes to the starting line-up from the team that drew 2-2 with SPAL, as Andrea Conti and Simon Kjaer came back into the defence while Alexis Saelemaekers and Giacomo Bonaventura supported Zlatan Ibrahimovic, with Ante Rebic benched.

The opening 10 minutes were battled out with the kind of intensity you might expect from two sides with vastly different objectives, though the Rossoneri were the ones pressing highest and probing for an opening.

Gianluigi Donnarumma was called into his first save in the 22nd minute as Sergej Milinkovic-Savic dipped a free-kick over the wall that was an easy catch for the Italy international.

After what had been a dismal start to the game, Hakan Calhanoglu broke the deadlock with a moment of individual brilliance. Some nice link-up play involving Ibrahimovic saw the Turkish international weave some space on the edge of the box, and he found the net with a deflected effort that lobbed past Thomas Strakosha.

Milan thought that they had doubled their lead just after the half hour mark when a beautiful cross from the right side was turned home by Ibrahimovic at the far post. However, the goal was quickly chalked off by a correct offside call as the Swede had strayed around three yards offside.

Just a couple of minutes later it was 2-0. A cross from Alexis Saelemaekers struck the hand of Radu and Gianpaolo Calvarese pointed straight to the spot, with Ibrahimovic stepping up and squirming his effort past Strakosha, who guessed the right way.

Pioli was forced into a change almost straight after the goal however, as goalscorer Calhanoglu limped off with Lucas Paqueta coming on in his place.

The pressure was then on Simone Inzaghi’s team to respond, but the closest they came before the break was an effort from just outside the box from Luis Alberto that was dragged wide.

At half-time Pioli made a change, opting to take Ibrahimovic off in favour of Rebic.

The home side had the first chance of the second half as Correa had space to shoot from a narrow angle around 10 yards out, but Donnarumma had it easily covered at his near post.

Up the other end Strakosha was kept busy as Franck Kessie’s side-footed effort from the edge of the box almost caught him off balance, but the Albania international recovered well to get his body behind the ball.

Lazio thought they had a route back into the game when Manuel Lazzari fired past Donnarumma when put through on goal on the counter-attack, but the offside flag rightly went off as the ball was fired into the back of the net.

Giacomo Bonaventura became the latest to let fly as attack was the best form of defence for the Rossoneri; the No.5 drilling an effort from 20 yards narrowly wide of the near left post in the 56th minute.

Moments later it was 3-0, and it was the substitute Ante Rebic that got his ninth goal of the year. Bonaventura showed exceptional awareness on the edge of the box to wait to play an incisive through ball to the Croatian, who took a touch to settle the ball before stroking past Strakosha into the far corner.

Milan were close to making it 4-0 in the 68th minute as Theo Hernandez went on a marauding run from his own half, playing a lovely give-and-go with Rebic but seeing his effort saved well by Strakosha.

Two more substitutes were made by Pioli just inside the final 20 minutes as Davide Calabria and Rade Krunic came on for Conti and Bonaventura respectively.

Theo Hernandez had another huge opportunity to get himself on the scoresheet when he was found completely unmarked in behind with a beautiful through ball, though the Frenchman inexplicably rolled the ball wide after opening his body up.

Lucas Biglia came on for the omnipresent Franck Kessie inside the final five minutes as Pioli’s side just looked to run the clock down, something they were ultimately able to do without any more issues.

The result moves Milan two points behind Roma in fifth place although the Giallorossi have a game in hand.