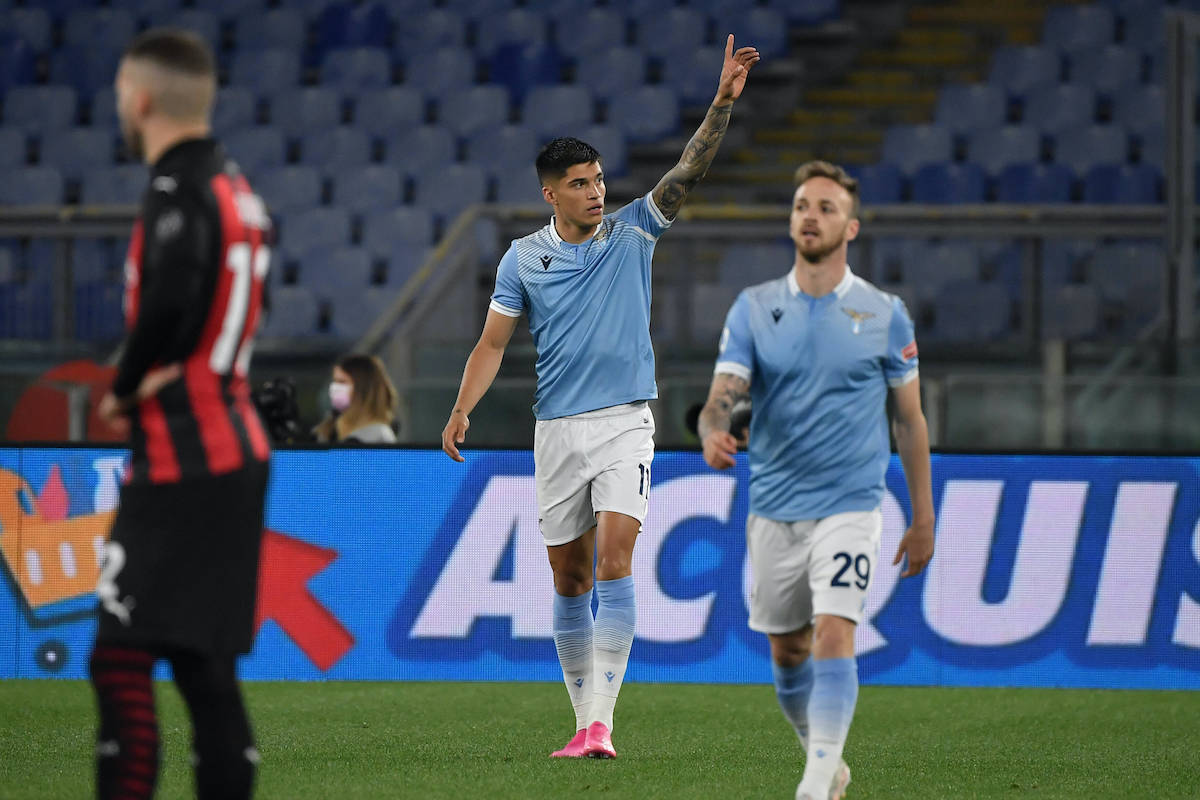 AC Milan fell to their second damaging defeat in less than a week as they were beaten 3-0 away from home by top four rivals Lazio.

It took the capital club just 77 seconds to break the deadlock as Joaquin Correa netted once again against the Rossoneri after rounding Gianluigi Donnarumma with the home side’s first attack of the game.

Lazio then had a goal ruled out just before the break but did double their lead just after and it was Correa again who got his second of the night, beating Fikayo Tomori in isolation and firing past Gianluigi Donnarumma at the near post.

The Biancocelesti made it 3-0 late on as Ciro Immobile got the goal his performance deserved, and another devastating loss means that Milan are now tied with Napoli and Juventus on 66 points with Atalanta taking sole possession of second place.

Pioli made three changes from the starting line-up that lost against Sassuolo on Wednesday as Mario Mandzukic started up front instead of Rafael Leao, Theo Hernandez recovered to take Diogo Dalot’s spot and Ismael Bennacer returned to partnering Franck Kessie in the double pivot.

Milan certainly started brightly from kick-off and Pepe Reina was forced into a save after 21 seconds. A neat one-two between Mandzukic and Calhanoglu ended with the latter shooting weakly from just inside the box.

However, it would be Lazio who took an early lead exactly a minute later. A lovely through ball from Ciro Immobile found Correa who showed composure to round a grounded Donnarumma and slot into the back of the then-empty net to make it 1-0.

Lazio could and arguably should have doubled their lead within five minutes and it was Immobile this time who was in a dangerous area with space to shoot inside the box; though Donnarumma produced a fantastic low save after a free-kick had fallen to the former Sevilla man.

Correa had a chance to double his tally as Theo Hernandez headed a cross right to him on the penalty spot under little pressure, yet the playmaker hit his volley into the ground and it bounced onto the roof of the net with Donnarumma scrambling.

Mandzukic should have got his first goal in a Milan shirt in the 20th minute when a corner from Calhanoglu was glanced to him at the far post but the Croatian couldn’t adjust his body in time to direct it goalwards and ended up being punished for handball.

Theo Hernandez continued looking like his wobbly recent self when he – despite having had chance to clear the ball – decided to dribble it towards his own corner flag before being dispossessed. Luis Alberto’s shot thankfully whistled over and wide of the near post.

Milan began to put more pressure on in search of an equaliser, and Rebic became the latest to try his luck but miss the target just before the half-hour mark having used Theo’s decoy run to cut onto his right foot.

It really should have been 1-1 moments later when Saelemaekers flicked a perfect ball over the top to find Calhanoglu in acres of space in behind, though the Turkey international shot straight at Pepe Reina from deep inside the box despite having evaded the challenge that came in.

It seemed as though Kessie was actually punished for being honest and getting straight back to his feet when he was brought down inside the box by Luis Alberto, as a very good penalty shout did not even get VAR consultation. Seconds later, a nice give-and-go between Saelemaekers and Calhanoglu saw the letter set up the former but his curling shot was saved by a stretching Reina.

The chances continued to flow for Milan, as Theo Hernandez whipped a sharp first-time effort with his instep from Rebic’s feed that looked dangerous but fizzed over Reina’s bar.

Despite all the pressure, the home side were the ones who thought they had doubled their lead and it came from a counter-attack that threatened to unfold several times. Lazzari was the man put through on goal and he slotted under Donnarumma but after a lengthy VAR consultation it was determined that he was narrowly offside.

The final chance of a frantic first half fell to Mandzukic as a long ball over the top ended up being directed into his path by Saelemaekers’ smart flick, though Reina was equal to the volley.

Milan continued their first half trend of trying one-two link-up play on and around the edge of the box, but Saelemaekers arguably should have shot instead of trying to flick the ball in behind to Kessie, whose first touch let him down.

The Rossoneri would be punished in the seventh minute of the second half as Lazio doubled their lead, again through Correa. The hosts sprang another counter-attack that allowed the Argentine to beat Tomori in isolation and fire past Donnarumma at the near post. The goal was confirmed after another lengthy VAR check for a potential foul on Calhanoglu in the build-up.

Correa continued to cause Tomori havoc down the right channel and Donnarumma was forced into a full stretch fingertip save to deny him a hat-trick.

A double change came for Milan with 27 minutes left on the clock as Mandzukic and Saelemaekers made way for Rafael Leao and Brahim Diaz, with Pioli looking to inject some pace and trickery.

Leao got involved not long after coming on as he flicked a ball through to Calabria in space over on the right flank but the full-back saw his low shot deflected wide for a corner.

Another double substitution followed with just over 20 minutes left as Diogo Dalot and Sandro Tonali came on for Calabria and Bennacer. Kjaer made way for Alessio Romagnoli not long after.

It was inches away from being 3-0 and game over when Milinkovic-Savic slid Immobile through on goal but the Italian striker hit the post after chipping the onrushing Donnarumma from about 25 yards.

Lazio did get their third goal with minutes left on the clock as Immobile was awarded a yard of space inside the box, firing past Donnarumma and inside the far post.

Kessie hit the woodwork with a header from a corner in the dying seconds in what would be the final chance of the game and a rather fitting summary of Milan’s night in the capital.