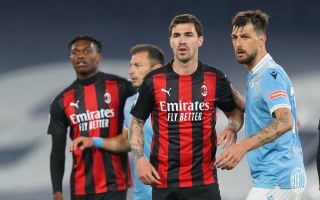 After a disaster of a result against Sassuolo, Milan continued to dig their own grave against Lazio, losing 3-0 and thrusting a top four finish into further doubt.

The game in Rome started in an awful manner for the Rossoneri as they conceded just 77 seconds into the game and had it not been for Donnarumma they could have found themselves trailing by two goals in just four minutes.

After that the Rossoneri slowly started playing better and had a few good chances to score an equaliser, but failed to do so. Their performance again dropped after the break and Lazio went on to score two more goals leaving Milan in a really bad position in terms of the top four race.

Picking up on individual mistakes in a game like this will be hard, or at least take a lot of time as virtually all the players failed to bring anything to the table.

One man however has been on a downward trajectory for quite a while now is Theo Hernandez, who was on fire in his first season for Milan and continued to grow in the first half of this season but since the turn of the year the left-back has been in disastrous form.

It feels like it’s getting worse and worse for him as the Frenchman had multiple misplaced passes causing a lot of trouble for his team and his usual attacking presence is nowhere to be seen. It is a big question mark that needs answering as Pioli relies on him so much for his attacking pattern play.

After impressing since joining, Tomori is another player that is struggling for form recently. The Englishman has made crucial mistakes for three games in a row now costing Milan points that might have played a big role in the top four race.

Tomori didn’t really manage to take care of either Immobile or Correa when he had to. While a couple of weeks ago it was looking certain that Milan would exercise their €28m option to buy the Chelsea man, it now appears Maldini may try to negotiate himself a discount.

We got really used to seeing Bennacer and Kessie dominate the majority of their midfield battles week in week out, but since the Algerian came back from his injury he has still yet to revive his old form.

Whilst Kessie was doing a lot of the heavy lifting even without Bennacer, the Ivorian has looked somewhat fatigued in the last couple of games which may be understandable as he’s had little to no rest throughout the whole season.

One thing is for sure: Kessie and Bennacer were dominant in the midfield and were at the heart of the red hot form Milan were in last year, and that will be needed for the rest of the season and beyond.

Whilst it’s easy to blame the defence to start with for all the goals let in, it would also be fair to analyse the situation and how this team worked since Pioli became coach.

The main weapon of the team was their attack where they were breaking record after record by scoring two or more in every game. Theo Hernandez was deadly on the left flank with Zlatan, Rebic and Hakan picking up goals and assists for fun.

When this was happening Milan were committing a lot of bodies forward but unlike now the goals were actually there. Scoring so many almost always forced the opponents to attack and Milan sat organised in their half and pressed intelligently when the time was right without exposing themselves at the back.

That definitely made the life of the defenders easier, but now with none of the attacking players being clinical and Ibrahimovic missing, the team is struggling to actually convert the chances they have. On top of that, Theo Hernandez is having his worst period so far.

That being said with all the inefficiency up front and the wide open style of play, Milan’s defence is being exposed too much resulting in even more mistakes from the defenders and no margin for error.

The only positives for Milan came from their right flank where Alexis was easily the Man of the Match. He was full of energy, and looked like the only player that is trying to take on responsibility. The Belgian did create a few decent chances for his team-mates and he could have made the shot himself on a few occasions, but decided to try and seek the pass.

Davide Calabria was another player for Milan who was solid throughout the time he was on the pitch as he got the job done without anything special though.

Weirdly enough, Pioli decided to substitute them off the pitch after the hour mark which might have been a choice based on fitness, but it sure looked strange.