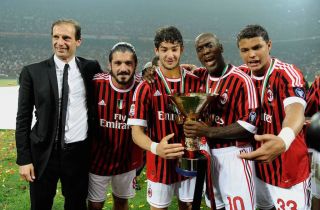 Le10Sport: Allegri and Thiago Silva could reunite at PSG in double blow for Milan

AC Milan have been dealt a blow in their reported pursuit of Paris Saint-Germain defender Thiago Silva, according to reports.

The latest from Le10Sport claims that Max Allegri could be PSG-bound as the club’s new head coach. One thing is for sure: the French outlet claims Allegri will not return to Milan despite the wishes of Paolo Maldini, in large part due to his €10m-a-year salary requests.

PSG meanwhile are happy with the work their current manager Thomas Tuchel has done, but sporting director Leonardo cannot resist the idea of trying to tempt Allegri to start a new adventure in Paris.

The Italian’s possible arrive at PSG risks changing Thiago Silva’s fate too. Numerous recent reports have claimed that the defender’s return to Milan is a possibility, but the presence of Allegri could change everything as the pair worked together for two years at Milan and won a Scudetto and an Italian Super Cup.

There was a good feeling between the two and it cannot be excluded that the defender would push to stay and could be given the new deal he so badly wants.