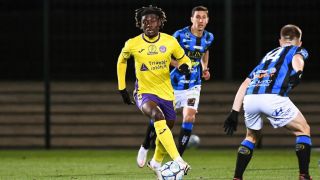 Le10Sport: Milan set to miss out as Monchengladbach close in on completing Kone deal

Toulouse midfielder Kouadio Kone is about to complete a January move, a report claims, but not to AC Milan.

Calciomercato.com backed that up by adding how Milan have decided to move quickly to beat the competition from Monaco, Leeds and German clubs, but then the Toulouse head coach tried to put a stop to the rumours by insisting Kone will not leave this month.

According to the latest from Le10Sport, Milan have indeed launched an offensive in recent days offering €6m for the 19-year-old, and he is expected to leave the club soon.

However, they report that a comprehensive agreement is about to be finalised with German club Borussia Mönchengladbach. Even though it is not yet a fully done deal things are very advanced, though the amount has not yet been disclosed.