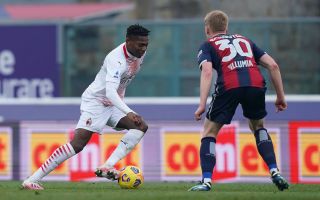 Leao believes Milan deserved Bologna win and insists: “We always go out on the pitch to win”

AC Milan forward Rafael Leao believes that he and his team-mates ran out deserves winners against Bologna this afternoon.

The first goal came in the first half when Ante Rebic was on hand to fire home a rebound after Zlatan Ibrahimovic had missed an initial spot kick, which was awarded after Leao was hauled down inside the box.

The second goal was also the result of a spot kick, but this time Franck Kessie converted at the first attempt after a clear handball inside the Bologna box.

It wasn’t exactly the easiest of games for Milan, who found it a very difficult last 10 minutes against a resurgent Bologna side when Andrea Poli scored to halve the deficit.

Leao was interviewed by Sky Italia at the end of the game, with his comments transcribed by MilanNews and translated below.

On the match: “We put intensity into it. We dropped a bit at the end, but football is like this, we suffer. The victory is deserved.”

On penalties: “We have quality players, many can score goals, the important thing is to score.”

On the Scudetto: “We are Milan, we always go out on the pitch to win. The road is long, we think game after game.”

On his rap career: “That’s a hobby, the most important thing is football. When I’m on vacation I make songs.”