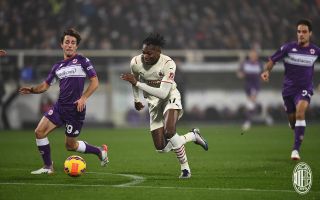 AC Milan are confident that they will soon reach an agreement with Rafael Leao over the extension of his contract, according to a report.

Leao joined Milan from Lille back in the summer of 2019 and although he showed more than brief glimpses of his ability during the first two seasons of his Rossoneri career, the consensus heading into his third campaign at the club was that he needed to take a step forward from a consistency standpoint. He has certainly done that, scoring five goals in all competitions this season and becoming more decisive within games.

According to il Corriere dello Sport (via MilanNews) this morning, Milan are working with confidence on Rafael Leao’s contract extension. The paper focuses on the negotiations for the renewal of the Portuguese winger, who is expected to sign a new agreement until 2026.

As part of that, his agent Jorge Mendes will also secure a pay rise too, given that his current salary amounts to €2m net per season, with a new figure to be more reflective of his status within the squad.

READ MORE: Ibrahimovic on the hunt for another incredible record against Atletico Madrid