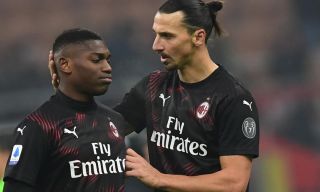 Leao clarifies comment about preferring to work with Cristiano Ronaldo over Ibrahimovic: “With both”

AC Milan winger Rafael Leao has moved to clarify on social media reports suggesting he said he prefers to play with Cristiano Ronaldo over Zlatan Ibrahimovic.

Leao has certainly been in impressive form for the Rossoneri this season as he has netted four league goals in addition to scoring his first ever Champions League goal, and that has earned him a call-up to the Portuguese national team for their upcoming World Cup qualifiers.

Leao spoke at a press conference directly from Portugal’s training camp in view of the upcoming games against Ireland and Serbia, with his comments relayed by MilanNews.

“We expect two finals, we are not playing for a draw. We want to win both matches to get first place in the group. We are Portugal, we always enter the field with the desire to win. Ireland and Serbia are two very strong teams, we have to stay focused even if there will be a bit of anxiety for qualification,” he said.

As part of the questioning, Leao was asked: “Are you happier to work with Ibrahimovic or with Cristiano Ronaldo?

He responded: “I always try to learn from them, they are two great players. I am happier to share the pitch with CR7 because he is a player that I admire a lot.”

However, the 22-year-old was quick to clarify what he really meant on social media as he quoted a tweet from PianetaMilan that relayed his quote by commenting ‘With both of them” along with a handshake and a shushing emoji.