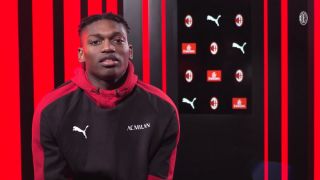 Rafael Leao has thanked Zlatan Ibrahimovic for helping his development and revealed he has two dreams he wishes to achieve at Milan.

Leao gave an interview to StarCasinò Sport conducted by the well-known DJ Max Brigante, in which he talked about his two greatest passions: football and music . The video with Leao’s full interview will be available later today, while PianetaMilan have transcribed an extract that has been released.

The Portuguese starlet has already produced some singles but on January 29 he released an album entitled Beginning, containing seven tracks that will range from rap, trap and drill.

On his first EP, Leao said: “I am very happy with the success obtained with Beginning, it was very well received both on Spotify and on YouTube. My passion for music was born thanks to my dad, who used to be a singer, but my true love is football.”

On his passion for football, he added: “I always played with my friends close to home and then there was the turning point, I remember well the emotion when I passed the trial to enter Sporting Lisbon and later they decided to sign me.”

Leao has often praised Stefano Pioli and Zlatan Ibrahimovic for their role in his development as a young player, referring to the latter as big brother on several occasions. Pioli meanwhile has repeatedly challenged the former Lille forward in the media, asking for more from him, from both a consistency point of view and in terms of level of performance.

“Both have a very strong personality. Mister Pioli always stimulates me and I know that when he asks me more it is because I can give it to him. Ibrahimović is like an older brother to me, he has a lot of experience and we are all proud to have him in the team.

“The most important thing they taught me is the mentality. In football as in life, there are times when everything is fine and others when it is not, but if you have a strong mentality you can overcome all difficulties and do great things.”

Leao was asked by Brigante if he has any objectives and dreams that he wishes to achieve while with Milan, and the 21-year-old is certainly targeting big things.

“I want to play in the Champions League and win the Scudetto with Milan. When I retire? I will be close to football, but also to music, always my partner, who has helped me even in moments of solitude.”