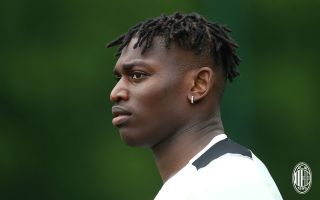 Sky: Milan hold onto small hope Leao could play against Napoli and Empoli

AC Milan have not totally given up on the idea of having winger Rafael Leao available for one of the games before Christmas, according to a report.

Peppe Di Stefano spoke to Sky Italia (via MilanNews) live from Milanello this afternoon and took stock of the injured Rossoneri players, confirming that Ante Rebic and Davide Calabria will return after the break for the Christmas holidays and therefore will miss the Napoli and Empoli matches.

However, with regards to Leao there is a micro-hope of having him available against Napoli or at least the match after that against Empoli, even if Pioli and the staff don’t want to take any risks and therefore it is not excluded that he will return to the field only after Christmas.

It comes after il Corriere della Sera (via MilanLive) reported this morning that Leao’s injury has not improved a great deal as he is still struggling with a small hamstring injury in his right thigh, meaning he will miss the rest of 2021.