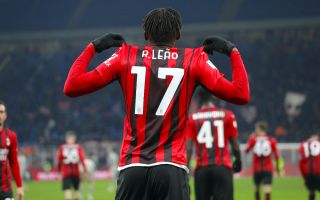 Just like he was in the win over Venezia on Sunday, Rafael Leao was again one of the stars of the show for AC Milan as they booked their place in the last eight of the Coppa Italia.

MilanNews writes how Leao was the one who essentially decided the match given that he came off the bench and scored the second goal which ended up being the winning goal against Genoa, albeit with an element of good fortune as his intended cross looped over Semper and went in off the far post.

Leao proved to be virtually unplayable for a tired opponent as he very much looks to be rediscovering his explosiveness from early in the season with his successful dribbles and his goals. He plays football with a smile and everyone can see how much he enjoys playing.

He is considered unsellable by Milan and that is why the Rossoneri management have been talking to Jorge Mendes, the agent of the former Lille man, about his contract renewal. It was essentially confirmed by Leao after the game too: “Renewal? “I don’t know. I’m fine now. Milan are a great club and Milano is a great city, I’m very happy here. Let’s see it’s still early.”

In short, the negotiations for his extension are ongoing and there seems to be the will on the part of both parties to go on together, but there is work to be done and the Portuguese forward is just focusing on playing.