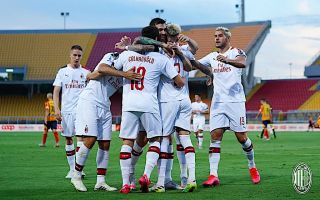 AC Milan put relegation battlers Lecce to the sword on Monday night as they ran out 4-1 winners at the Stadio Via del Mare.

The Rossoneri were wasteful in the opening 45 minutes and had Samu Castillejo’s neat finish to thank as they went in one up at the break, but Mario Mancosu’s penalty early in the second half pegged Stefano Pioli’s side back.

Nonetheless, Milan for once showed their ruthless edge scoring twice in three minutes before the hour mark, first through Giacomo Bonaventura’s instinctive finish and then when Ante Rebic finished a 1-on-1 perfectly.

The result means that the Diavolo keep up the pace in the fight for the final Europa League spot, drawing back level with Napoli on 39 points, albeit having played a game more.

Pioli made two changes to the starting XI which were knocked out of the Coppa Italia by Juventus the week before last, with Castillejo and Theo Hernandez both returning from suspension and slotting straight into the line-up.

The first half-chance went to the home side as a ball was swung over from a short corner from Petriccione that was headed comfortably over by Meccariello in the end.

Milan began to attack themselves and cut Lecce open down the left, with Ante Rebic’s cut-back from the byline eventually scrambled clear with Castillejo arriving.

The Rossoneri started to see the lion’s share of the ball thanks to their high press, and Castillejo saw a shot deflected narrowly wide of the near right post. From the resulting corner another corner was earned, and from that a Bonaventura shot was saved at close range as Pioli’s side began to turn the screw.

Castillejo was once again involved not long after as a lovely counter-attacking move saw Theo roll the ball to Bonaventura, who fed the Spaniard though Gabriel was equal to his stinging near post effort.

The former Milan stopper was called into action yet again in the 20th minute, this time palming away a long range effort from Franck Kessie that was destined to creep inside the post.

Gabriel continued to be busy as five minutes later he made another smart low save – this time the Brazilian did well to stop an effort from Theo squirming underneath him from a narrow angle eight yards out.

However there was nothing he could do about Milan’s opener just a minute later. Some excellent build-up play saw Calhanoglu pick up the ball wide on the right, with the Turkey international drilling in an excellent low ball that Castillejo flicked first time inside the far post with a deft finish. Replays showed Bonaventura actually flicked the ball on to Samu’s boot from a yard away.

There was a moment of panic moments after the goal when Kjaer collapsed in a heap after a late challenge, though the Danish international managed to continue.

Milan thought they had missed a golden chance to go 2-0 up 13 minutes before the break as Bonaventura waited too long before seeing his shot blocked on the edge of the six-yard box, although in the end it emerged Theo was offside in the build-up anyway.

It looked as though Lecce had scored an equaliser against the run of play when Calderoni’s ball into the box was converted by Biagio Meccariello who slotted past Donnarumma with a powerful finish into the roof of the net. The flag went up and replayed suggested it was a close call before the decision was ultimately upheld.

In the first minute of four added at the end of the first half space opened up for Petriccione to fire at goal, but the midfielder blazed his effort over.

Gabbia had a chance to score his first ever goal for Milan in the third added minute as he hit a volley straight into Gabriel’s arms on the bounce, but he was caught out of position when moments later Lapadula was put through on goal, though he dragged his effort wide form 18 yards and was forced off with injury.

The second half started as frantically as the first, with substitute Khouma Babacar rolling an effort wide of the far post.

There was another moment of controversy in the 54th minute when Gabbia was penalised for a foul on Khouma Boubacar with Paolo Valeri immediately pointing to the spot and not consulting with VAR, and Mario Mancosu sent Donnarumma the wrong way from the spot to level.

However parity would be short lived for the home side as Bonaventura was quickest to pounce on a terrible rebound Gabriel gave up from Calhanoglu’s effort, slotting home from close range to restore Milan’s lead quickly.

Moments later it was 3-1, as Ante Rebic found himself completely alone inside the Lecce half with a free run at goal, and he made no mistake converting with composure for his eighth goal of the season in all competitions.

Milan made a double change midway through the second half as Alexis Saelemaeker came on in place of Samu Castillejo, and goalscorer Rebic came off for Rafael Leao.

Just inside the last 20 minutes the Rossoneri made it 4-1 though to properly kill the game off, and it was Leao who made an instant impact. Calhanoglu sprayed the play over to Conti on the right side of the box, who fired a perfect ball across goal for the Portuguese starlet to head home from three yards out at most.

Pioli made his final substitutions with just a few minutes remaining although they were rather questionable; Lucas Biglia and Lucas Paqueta coming on for Bonaventura and Kessie.