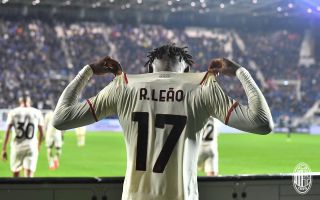 Lightning start and a first since 2013: All the key stats from Milan’s win over Atalanta

AC Milan managed to rack up a third consecutive win in Serie A by beating Lombardy rivals Bergamo 3-2 at the Gewiss Stadium.

In truth the 3-2 scoreline actually flattered the home side as Milan raced out to a 3-0 lead thanks to goals from Davide Calabria, Sandro Tonali and Rafael Leao, with a Cristian Zapata penalty and a late Mario Pasalic strike making the margin look less comfortable.

Below are the best post-match stats from the game, as reported on the club’s official website…

➤ Milan have picked up 19 points so far, equalling their best start from the first seven games of a single Serie A campaign since the three-points-per-win era began (19 in 2003-04 too).

➤ The Rossoneri have recorded two successive wins away to Atalanta in Serie A for the first time since 2013.

➤ Milan have scored eight goals in the opening 45 minutes during the current Serie A campaign: only Lazio have done better than this.

➤ With just 28 seconds on the clock, Davide Calabria scored AC Milan’s third fastest goal in Serie A since 2004-05: only Leão against Sassuolo (6 seconds), and Muntari against Juventus (18 seconds) were faster. It was Calabria’s fourth away goal of his six in total scored in Serie A.

➤ Sandro Tonali is the youngest midfielder to have scored at least two goals so far this season; the second youngest in this statistic is another Rossonero, Brahim Díaz.

➤ In the first seven games of this league season, Tonali, with two goals, has already exceeded the total number of goals scored in his first 60 appearances in Serie A.

➤ Milan scored with two Italian players in the same Serie A match for the first time since August 2018 against Napoli: on that occasion, it was Giacomo Bonaventura and Davide Calabria who found the net.