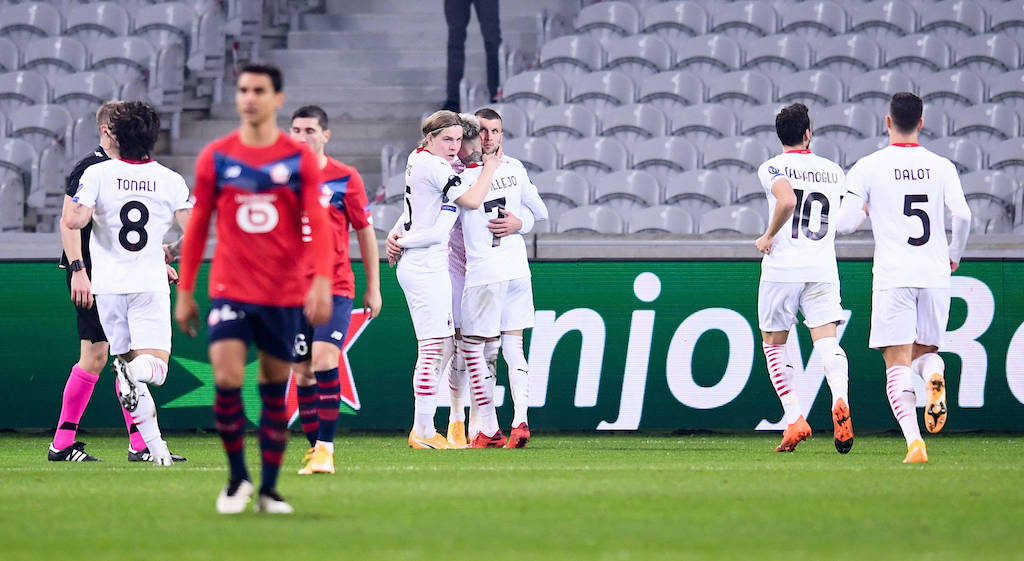 Lille 1-1 AC Milan: Rossoneri unable to take back top spot after being held to frustrating draw

AC Milan were unable to steal top spot in the group back from Lille as they surrendered a lead to draw 1-1 with Lille in the Europa League.

After a scrappy first half it was Samu Castillejo who gave Milan the lead with a close range finish after an incredibly swift and incisive counter.

However it would not be enough to secure three points and move back above the Ligue 1 side as Jonathan Bamba netted an equaliser following some defensive confusion to earn Les Dogues a draw.

With Sparta Praha’s resounding win over Celtic it means Milan are currently just a point clear of the Czech side – who are third in the group – ahead of Celtic’s visit in a week’s time.

There were five changes to the starting XI from Sunday’s win over Napoli as Diogo Dalot and Matteo Gabbia came into the back four and Sandro Tonali into the midfield, while Samu Castillejo and Jens Petter Hauge were in the trident behind Ante Rebic with the Norwegian getting his first start for the club.

After a cagey battle to begin the game with little in the way of chances, it was Milan who had the first real chance at the Stade Pierre Mauroy. In the 10th minute a wonderful cross from Theo Hernandez on the left found an unmarked Rebic but it bounced just in front of him and he scuffed his effort from inside the area.

The home side followed up with a half-chance of their own and it came from a shaky piece of play by Tonali; the midfielder gifting possession back to Lille near the edge of his own box but thankfully Yazici fired wide, unlike the reverse fixture when every shot he took seemed to go in.

The story of the opening quarter of the game was an intense press from both sides which limited their opponent from imposing themselves on the game, something which was not helped by some slack passing, terrible touches and a lot of cheap fouls.

Milan wasted a huge chance in the 24th minute as Jens Petter Hauge was put in behind the Lille defence and had two options to his left who were also clear in Rebic and Theo, however he stalled on making a decision and his pass across goal was cut out.

Donnarumma was forced into his first save of the game after what was a sloppy giveaway again inside Milan’s third from Dalot, though the Italy international comfortably palmed a sweeping shot over the bar from Araujo that was dipping under the crossbar.

The same player was involved again a few minutes later and this time he forced Donnarumma into a save at full stretch to his right with what was a whipped first time shot from around 22 yards that was destined to curl inside the far post.

The Rossoneri chose to make no changes at the break, and they were perhaps rewarded for that immediately as they took the lead just two minutes into the second half.

A beautiful and perfectly weighted through ball from Sandro Tonali found Rebic through on goal, and when it looked like he had held onto the ball for too long he cut back to Castillejo who was in space to fire into an empty net from close range.

😍 A lovely through ball from Tonali, unselfish play from Rebic and Castillejo makes it 1-0.pic.twitter.com/tABypacyAH

Lille began to retain the ball a bit better after going behind and were moving more actively around the final third to try and confuse Milan’s block, but there was the subsequent risk of a counter-attack.

There was a reminder of that when Calhanoglu was found on the left edge of the box, but the Turkey international should have pulled the ball back rather than shooting into the side netting from a narrow angle.

A double substitution came from stand-in boss Daniele Bonera on the hour mark as Calhanoglu and Rebic made way for Brahim Diaz and Lorenzo Colombo respectively.

Brahim almost made an instant impact when he went on a weaving run through the Lille midfield and threaded the ball through to Hauge, and rather than keeping hold of the ball too long this time he perhaps fired a pass across goal too soon that was cut out.

Milan would be made to pay for not getting the second goal as the home side levelled. A ball ricocheted off Gabbia and across the box where Jonathan David perhaps unintentionally directed it into the path of Jonathan Bamba, who fired in via a deflection from Kjaer with the Rossoneri’s defence stood still.

In the 77th minute Milan made another change to counter the fact that Lille were growing in confidence, taking Hauge off and bringing on Rade Krunic.

Despite endeavours from both sides there was no real quality in the final moments as the game petered out for a draw that in truth helps Lille more than it does Milan, given Sparta’s 4-1 win over Celtic which now has them breathing down their neck.