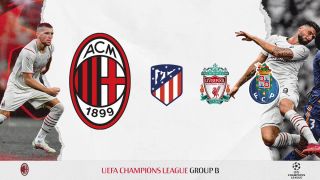 After a nail-biting end to the 2020-21 campaign. AC Milan finished in second place in Serie A and cemented their return to Europe’s elite club competition after a seven-year absence.

With the draw taking place in an infamous place for Milan (Istanbul), the powers that be ensured the Rossoneri received a very challenging draw. Regarded by many as ‘The Group of Death’, Stefano Pioli’s man were pitted against former champions Liverpool who lited the trophy three seasons ago and a foe in which the club share a deep and rich history with.

Also in the group are the recently crowned champions of LaLiga Atlético Madrid and the heavyweights in Portuguese football FC Porto. It is safe to say, the long-awaited return for il Diavolo will not be an easy one, but the club is back where they belong and you have to beat the best to be the best!

Below is a scout report of the three sides in the mix, where we will delve into the history of the teams in the competition, their trademark playing styles and some of the key players to keep an eye-out for…

Six-time champions Liverpool, like Milan are no strangers to this competition, in almost every decade since the European trophy has existed, they have been in the competition. The relatively recent ‘come-up’ of this Liverpool side, most notably down to their excellent manager Jurgen Klopp is widely known by this point.

They are a side that excels in the attacking phases, possessing the most intense press in Europe and are hell-bent on outrunning their opposition with pure intensity, pace and will. However, there has been a shift in how they play in recent seasons, mainly down to the fact that playing so intensely like that is not sustainable for the players.

There is now more impetus on a possession-based style reflected in some recent signings most notably, midfield dynamo Thiago Alcantara. Although their extreme pressing style of play may have slowed down slightly, favouring a mixture of possession-based play, it is safe to say they will aim to overwhelm Milan with ferocity and pace.

In regard to the players that Pioli in particular will need to study and warn the boys in red and black about, most are household names at this point are numerous. There is no hiding that from an attacking perspective the true danger man for them is Mohammed Salah.

A player on the precipice of being regarded as an all-time great in premier league history, he has scored over 20 goals in all competitions since his debut at Liverpool. He also possesses a great affinity with the Champions League having scored 26 times in Europe whilst at the Reds.

There is also the lightning quick and hard-working Sadio Mane as well as the prospect Diogo Jota that can cause Milan’s defence a few headaches. In the midfield rather than having ‘superstars’

Liverpool’s system allows the likes of Jordan Henderson, Fabinho and Thiago to help facilitate the outrageous attacking output. In defence however, there is one name that the Rossoneri will need to be careful about and that is none other than Virgil Van Dijk, a man-mountain and fantastic defender, he will surely provide the biggest obstacle to Milan over the two-legs.

Lastly, is the also fantastic and consistent Alisson in net who is more than capable of pulling out a couple unbelievable saves that could deny the Diavolo. It is not possible to cover all the players here but this snapshot analysis, but this insight gives an idea as to the main threats and style of play of Liverpool.

Although they are on paper the hardest side in the group Milan will face, especially considering their likened European pedigree, they are worse than they were a couple of years ago overall and the slight signs of decline could align to be good timing for Milan, meaning a win cannot be ruled out for either leg.

A club very much on the rise when looking at recent history, Atletico Madrid are recent domestic champions and a team that possess some serious continuity in Diego Simeone being in charge since 2011 and the club’s most decorated manager in their history. A team cemented in the Europa League’s hall of fame, winning the competition three times in dominant fashion.

However, with regard to the superior Champions League, the club has historically been quite poor and they have only reached 2 finals, both being very far apart from each other (1974/75 & 2013/14) never lifting the ‘big-eared’ trophy. However, their very recent rise to continuous European appearances cannot be ignored, cementing themselves as a competitive Champion’s League team for over 10 years.

Simeone has drilled his side into a defensive behemoth, playing direct football and exploiting counter-attacks mostly deployed via a 4-4-2 formation. They possess excellent defensive capabilities, making it very hard for any team to break down focussing on a low-block style that frustrates opponents and often forces errors from midfield.

However, Diego ‘El Cholo’ Simeone has evolved his style of play in recent times into slightly more developed midfield, concentrating more on possession passages especially when defending and counter-attacking. However, it is safe to say that Simeone’s default will always be the 4-4-2 and it is something that Pioli must have solutions for.

In terms of players, one could argue that Atlético have never had a stronger side than right now. Boasting the likes of Luis Suarez, who even in the advanced latter stages of his career, is still a deadly striker and more than capable of blasting most defences away.

Furthermore, they recently signed Matheus Cunha, who exploded for Brazil in the Olympics and in particular a player very much on the radar of Milan and who was heavily linked backed in the summer window – Rodrigo de Paul.

Not only this, but they have somehow managed to get the services of their most prolific UCL player back in Antoine Griezmann. As mentioned before, although they do not have a ‘superstar’ defender like Liverpool do in Van Dijk, the defence of Atleti is their strongest asset and Felipe, Giménez as well as Tripper and Lodi are not to be scoffed at.

But most importantly for the Madrid outfit is that they possess arguably the world’s best goalkeeper in Jan Oblak, a player who possess an absolutely absurd save percentage of over 75% on all shots faced.

It is no surprise that although they have threating attacking output, they provide almost an opposite challenge to that of Liverpool, and it will be breaking down their defence that will prove to be a very hard challenge for the Rossoneri.

Despite this, with the type of football Pioli is nurturing, and the pace we have in both attack and defence and with two big target men at our disposal, it is not an impossible task to win either of the fixtures.

On paper Porto are the easiest of the three opponents in Group B, being from the ‘weakest’ league of the three others represented and coming off a very underwhelming campaign by Porto’s standards, giving up the title to Sporting Lisbon for the first time in over 15 years.

They are a Champions League team though, and having won the competition twice in 1987 and 2004 they are not to be underestimated, knocking out Juventus among other big-name teams during some of their recent UCL runs.

They have a rich history in the Champions League, like Milan and Liverpool in this group. To this date the club remain the only Portuguese team to have won both the Super Cup and the Intercontinental Cup both in their first appearances.

What is more is that Porto occupy the ninth place in the all-time European Cup/UEFA Champions League club rankings. Further, they remain the best placed Portuguese team in the UEFA club rankings. It is safe to say they have true European Heritage.

Sergio Conceição’s Porto have not had a good record in the domestic Portuguese league, but when it comes to Champions League, they prove to a much harder team to break down. This alone highlights the difference in tournament football and for the Rossoneri, provides some positivity that nothing can be ruled out even with the hard group draw.

Whereas in the Portuguese league Porto’s style is very attacking, pressing high and aiming to hunt the ball down to beat opponents down; in the UCL Conceição adjusts his style to surrender the ball and apply a deep defending style.

Trading the attacking style enjoyed in the Primeira Liga for a more robust, no-nonsense style of defending, relying on Chancel Mbemba, Malang Sarr and the ever present, Pepe. Utilising an effective 4-4-2 that aims to restrict oppositions options, forcing them down the middle of the park.

In terms of players to identify, there are a few that Pioli must study and that the boys in red and black have to watch out for. Their most creative player who was also linked heavily with a move to the red side of San Siro is Otávio a central based attacking midfielder who excels in darting runs.

Another danger man and yet another recent target for our right side is Jesús Corona, a very versatile midfielder who can play anywhere from right-wing to right-back and like Otávio possesses explosive pace that could prove to be troublesome.

Other notable players include the stalwart Sérgio Oliveira in the midfield and the aforementioned seasoned Champions League defender Pepe. The no-nonsense style that Pepe helps imbue into this Porto side being the captain, as well as his mastery of the dark arts of the game will mean that Porto are by no means an ‘easy’ opposition.

With that being said, if the experienced players can step-up for the Rossoneri, and help the super talented but inexperienced youngsters we possess, Milan will have too much technical quality for Porto to overcome.

Like the two other teams analysed before, a result is not guaranteed, and in most cases not even expected, but this is the UEFA Champions League we are discussing, and Milan are more than capable and have more than a chance to get results in all of these fixtures.

Let’s hope that the combination of experience in the likes of Zlatan and Giroud alongside our explosive talents in Leao and Theo can step-up and help pronounce A.C. Milan back into the European foray and into the conversations of fans all over the world.