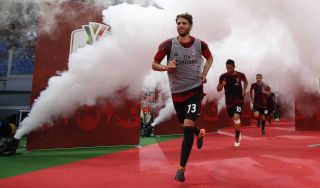 Manuel Locatelli has once again reflected upon his experience coming through the youth system at Milan, including how leaving left him feeling upset.

The midfielder joined Milan from Atalanta’s academy system in 2009 as an 11-year-old, and spent nine years at the club prior to leaving in summer 2018, but his exit came after he exploded onto the scene by scoring a couple of memorable goals including a winner against Juventus at San Siro.

Locatelli spoke to Sky Italia and reflected upon his experience with Milan, branding his exit back in 2018 as ‘devastating’, with his comments transcribed by MilanNews.

“The moment of my first training with Milan was an incredible emotion. I was 16, Allegri called me to the first team and Galli told me I had to train with them: there were Kakà , Robinho, De Jong. An emotion that I will keep for my whole life. I will always remember the moment of my first contract as a professional: there was Galliani, a person I respect deeply and who was very important to me, who he gave me his pen, that of Milan, it was a great emotion,” he said.

Locatelli made the headlines in the 2016-17 season when he scored an absolute thunderbolt against Sassuolo in a 4-3 comeback win for his first Serie A goal.

“I scored my first goal in Serie A against Sassuolo. An incredible match, we were behind, I entered the field, we manage to equalise with my goal; when I think about it, I don’t remember anything. I just look at the ball that dropped, I hear the roar of the crowd and I start to run. These are emotions, moments, that you can’t describe. I didn’t really understand anything.”

He was 18 years old when he scored the winner against Juventus at San Siro in the same season; another excellent strike into the top left corner of the goal, this time rattling in off the crossbar.

“Milan-Juve is one of those beautiful matches to play, I managed to score the decisive goal for the victory, it was an incredible emotion. Then casually, because I hadn’t prepared a celebration, I slide and there is a photo that shows the fans in ecstasy: a perfect film. The moment when I was told by Milan that we had to go two separate ways was devastating.”

Locatelli ended up moving to Sassuolo where he has since established himself as a key member of the starting XI, particularly under current boss De Zerbi, and is also part of the Italian national team.