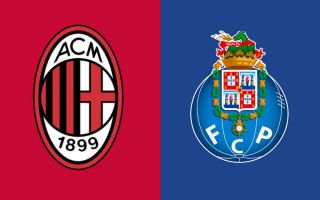 Losing run and tricky away customers: All the key stats ahead of Milan vs. Porto

The time has arrived where AC Milan simply have to get three points on the board against Porto tonight to keep their Champions League hopes alive.

The Rossoneri have lost all three of their group stage games so far against Liverpool (away), Atletico Madrid (home) and Porto (away) which leaves them bottom of the pile and four points off the LaLiga champions in second spot. They are playing Liverpool at Anfield tonight which means the gap could be cut if results go well.

➤ After only losing one of their first six meetings with Porto in European competition (W3 D2), Milan have since lost two of the last four (W1 D1), including the most recent meeting between the two – 0-1 in MD3 this season.

➤ This will be the fifth time that Milan have hosted FC Porto in European competition, but the first instance since September 1996. Both teams have won twice in the previous four, with FC Porto winning 3-2 in the last such meeting.

➤ Porto have only lost one of their last five away games in the UEFA Champions League (W3 D1), after losing their previous three away from home in a row.

➤ Porto have kept a clean sheet in four of their last five away games in the UEFA Champions League (W3 D1 L1), including in each of their last two trips. They last kept three consecutive away clean sheets in the competition back in November 2012.

➤ Milan only attempted four shots in their 1-0 defeat against FC Porto last time out in the UEFA Champions League – their fewest in a game in the competition since December 2013 v Ajax (also four).

➤ Porto’s Luis Díaz has made 11 successful take-ons in the UEFA Champions League so far this season; only one winger – Nicolas Moumi Ngamaleu of Young Boys (20) – has completed more in the competition through the opening three matchdays.

➤ Since scoring four goals from five shots for Chelsea against Sevilla in December 2020, Milan’s Olivier Giroud has only scored once in 250 minutes of play in the UEFA Champions League – that goal also came while playing for Chelsea, while he’s yet to score in his three outings in the competition for his current club.

➤ Mehdi Taremi has been directly involved in each of Porto’s last three goals in the UEFA Champions League, scoring twice and also proving the assist for their winning goal against Milan last time out.

READ MORE: Spurs boss Conte ‘has always liked’ Kessie but talk of signing is ‘too early’