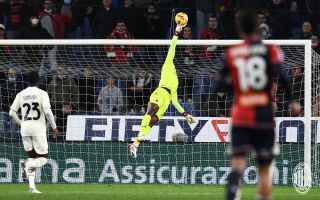 MN: Reflexes, leadership and distribution – Milan get the best version of Maignan back

Mike Maignan may have made his return against Sassuolo at the weekend, but last night during the win against Genoa it felt like he was really ‘back’.

As MilanNews writes, Maignan made two incredible saves to secure a first clean sheet since his return from wrist surgery. The first was a fantastic strong hand stop on Hernani’s header that was destined for the top corner, and then he backpeddled and tipped a Portanova effort over the crossbar after he shot from the centre circle.

The defence deserve credit for keeping out a wounded Genoa attack but ultimately the French goalkeeper showed his quality in the game. The saves made show he is very much not phased by the Sassuolo game – during which none of the goals let in were really his fault – but what Milan missed most of all was his vocal leadership and organisation for set pieces and in dangerous situations.

Maignan is very strong with his feet, confident with saves up high and down low, with excellent reactions and instincts on the goal line. Now, the goal feels much safer.