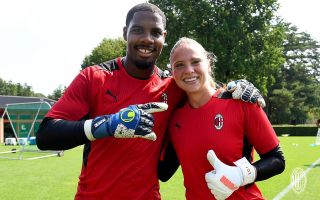 Mike Maignan has dropped a strong hint that AC Milan consider their target to be the Scudetto this season while speaking in his first press conference.

Maignan was Milan’s first signing of the summer is expected to make his debut in the friendly against OGC Nice at the weekend. Today marked his unveiling as a Milan player in front of the media, with the comments from his first press conference transcribed by MilanNews.

The Frenchman was asked about what Milan’s targets for the upcoming season are, given that the team are expected to follow up after a campaign which saw them finish in their highest position since 2011-12.

“We are all here to win, everyone is participating in the league to win the Scudetto. We will see how the season goes, it will take great concentration and be ready to always work hard,” he said.

The 25-year-old has of course arrived in Italy to replace Gianluigi Donnarumma who moved the other way to France, choosing to snub a contract extension with the Rossoneri in favour of a new adventure at PSG.

When asked if he feels the pressure to replace the Italian, Maignan replied: “Donnarumma has made a great contribution to Milan’s positive results. I am now starting my story, I will work very hard to do the same.”

Maignan was also questioned on any potential comparisons he can draw between his old coach at Lille Christophe Galtier and new boss Stefano Pioli.

“It is difficult to make a comparison, but I can say that they are two great professionals who make their teams work with great intensity.”