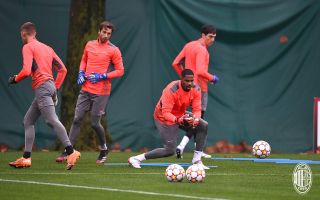 Mike Maignan is ready to make his big return for AC Milan and it could come in less than a week, according to a report.

As reported by La Gazzetta dello Sport (via MilanNews), Maignan was initially expected to be out for the rest of the calendar year after sustaining a wrist problem that needed an operation but he is set to trim a substantial amount off his recovery time, and now his return could happen as early as Sunday at San Siro, against Sassuolo.

The worst case is that the Frenchman will start on the bench and then take the field three days later in Genoa against Andriy Shevchenko’s side. He had his left wrist operated on back on 13 October and even though it was a minor surgery, his return to the field will arrive much earlier than thought as he has the green light from the medical area.

Everything will be done with the utmost caution and he will not be risked back, but the signs are good as Maignan did a part of training together with the other goalkeepers yesterday and then continued with personalised work. After he does a game in training, Pioli can decide when he is ready.