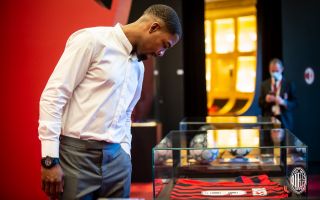 Maignan reveals Maldini and Massara were behind Milan appeal: “It is a big, ambitious project”

AC Milan made their first signing of the summer yesterday as Mike Maignan was officially unveiled as a Rossoneri player.

Maignan was interviewed by La Gazzetta dello Sport and was asked about his decision to leave a side that have just won the league in favour of a new opportunity in Italy.

“I chose Milan after speaking with Paolo Maldini and Frederic Massara. I liked their speech, because it is a big, ambitious project that suits me perfectly. So I decided to sign, also because after so many seasons and so many emotions lived in Lille, where I also grew up as a person, the time to change,” he said (via MilanNews).

Maignan will be the new starting goalkeeper AC Milan in place of Gigio Donnarumma which carries a certain amount of expectation, but the Frenchman is certainly ready for whatever is thrown at him.

“Milan are a great team and it is normal that in general there is more pressure than Lille. But I don’t land with the idea of ​​making them forget Donnarumma. He remains an important player in the history of the club. I just want to do my job and give my all for this shirt.”

Maignan will reunite with two of his former teammates respectively at PSG and Lille, namely Ibrahimovic and Leao.

“With Zlatan there was already a good relationship then, I know he will welcome me equally well at Milan which is a great club with many great players. It’s a good team and I think there will be no problem in settling in. Also thanks to Rafael who I have spoken to in these days.”

On why he decided to choose Milan and Serie A, Maignan cited the size of the club and the attraction of playing in a new league that is more tactical.

“First of all, Milan is one of the greatest clubs in the world, with a great history and great honours, built also thanks to great players. As a boy I have always followed the matches of Milan. I also spoke to Rabiot: it is a very tactical league and the training sessions are very intense, even physically. So it is ideal for someone like me who wants to continue improving, even mentally, a very important aspect. On this point I think to have made a lot of progress in the last two years.”

Regarding the speech with which Paolo Maldini convinced him to choose the Rossoneri club, the new Milan goalkeeper said: “I can’t tell every detail, but I understand that the project is really very ambitious and will allow me to continue to progress. But I also know that I can also bring something more to this team.”