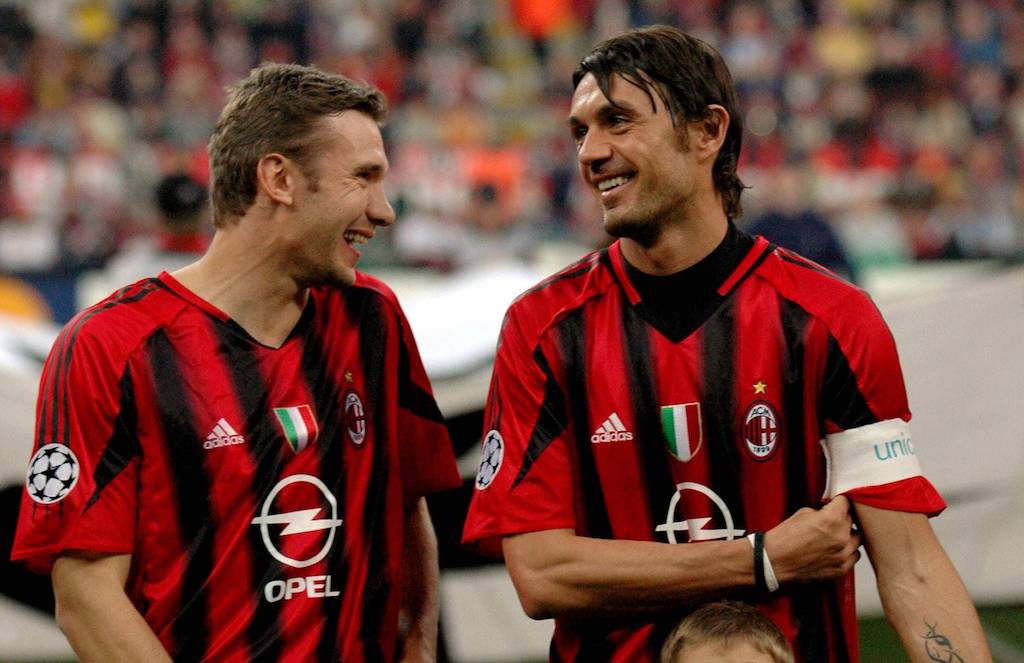 Maldini, Baresi, Shevchenko and more: Six of the greatest players to have pulled on a Milan Shirt

It is not an exaggeration to say that it is impossible to be a football fan and not have heard of AC Milan. Founded back in 1899, AC Milan truly are one of the most prestigious clubs in world football.

They have won the Scudetto 18 times and have won the Champions League 7 times, making them the second most successful European team behind Real Madrid.

Since the club’s conception, some amazing footballers have called the San Siro their home, and below we are going to take a look at some of the very best…

We do not think we will find many football fans who will be surprised to see Maldini on our list. He was without doubt one of the greatest defenders of all time, but what makes him even more special is the fact that he spent his whole career at Milan.

During his 25 years at the club he made a record 647 appearances and won the Serie A 7 times, the Champions League 5 times, and the Coppa Italia once. He was also capped 126 times by Italy, helping them to third at the 1990 FIFA World Cup and second at the 1994 FIFA World Cup.

When he retired in 2009, the club retired his shirt number as a sign of gratitude for the service that he provided over two decades. He was also inducted into Milan’s Hall of Fame as well as the Walk of Fame of Italian Sport. Even after retirement he is still a major part of this great club as he was given the position of technical director.

I am an Irish Milan fan and Maldini is actually the reason for this. I remember watching the 1994 World Cup group match between Italy and Ireland when I was just nine years old and being amazed at just how good he was. I asked my father which team he plays for and, when he told me AC Milan, I started to support them.

I must admit that I am also partial to a bit of football betting and really enjoy placing bets on the Serie A. I recently came across https://www.betinireland.ie/ and it has helped me greatly because I can find all the information that I need to know about the best Irish betting sites.

Just like Maldini, Baresi is another defender who spent all his career at Milan. He played for Milan for 20 years and was the team’s captain for 15 of those.

During his two decades at Milan, he helped them to win 6 Serie A titles and 3 Champions League titles. The fact that he is ranked 19th on the 100 best players from the 20th century and was named as Milan’s player of the Century speaks volumes about just how good a footballer he was.

Also, like Maldini, Baresi’s number 6 shirt was retired when Baresi hung up his football boots. Baresi also finds himself in Milan’s Hall of Fame, and rightfully so in our opinion. He played for Italy 81 times and was part of the team that finished second at FIFA World Cup in 1982.

Van Basten was, without doubt, one of the best strikers the world has ever seen and it is just a crying shame that he had to call time on his football career at the age of 28 due to injury.

He was known for his fantastic ball control, impeccable headers, attacking intelligence, and spectacular strikes, Van Basten was a striker that every manager would have wanted in their squad. He was so good that he won the Ballon d’Or in 1988, 1989, and 1992.

Van Basten signed for Milan from Ajax in 1987, and in his first year at the club he helped Milan win the Scudetto for the first time in 8 years. He went on to play another 7 seasons at the San Siro and scored a highly impressive 90 goals in 147 matches for the Rossoneri.

Milan won 3 Serie A titles and 2 Champions League trophies while Van Basten was playing with them. In 2004, Pelé, one of the greatest footballers ever, named Van Basten in his list of the best living footballers. Like the two Milan legends that we spoke about above, Van Basten has a place in the Milan Hall of Fame and the Italian Football Hall of Fame.

With 218 goals in 280 games, he truly was a footballing great. He was capped 58 times for the Netherlands, and in 1988 he helped his nation to win the European Championship.

Nordahl played for Milan in the 40s and 50s, and he truly was one of the best players of his time. During his time in the Serie A he finished as the league’s top scorer on 5 separate occasions, a feat that is yet to be matched by any other player.

It will come as no surprise to you to find out that he was inducted into Milan’s Hall of Fame. He played for Sweden 33 times (scoring 43 goals) and was part of the Swedish team that won gold at the 1948 Olympics.

Gullit was such a class act that he could play in a wide variety of positions. His unparalleled strength, football intelligence, amazing ball control, and fierce shots made him one of the best footballers of all time.

He signed for Milan from PSV in 1987 for 18 million guilders, which was a world record transfer fee at the time. He went on to spend 7 years at the club, making 125 appearances and scoring 38 goals.

Gullit helped Milan to win 3 Serie A titles and two European Cups and was eventually added to Milan’s Hall of Fame and the Italian Football Hall of Fame. He was capped 66 times by the Netherlands and was part of the team that won the European Championship in 1988.

Just like Marco van Basten above, there is absolutely no doubt that Andriy Shevchenko is one of the best strikers in the history of world football.

There is actually a fascinating background on how Milan signed Shevchenko from Dynamo Kiev all the way back in 1999 as it came from a scouting report that declared him immediately ready for a club of the Rossoneri’s stature.

With a tally of 176 goals scored for Milan, he is the second most prolific player in the history of the club and has also scored 14 goals in the Derby della Madonnina against Inter, the most of any player for either club in the fixture’s history.

He would win the Ballon d’Or in 2004 when he was at the very top of his game, which was in large part influenced by the role he played in guiding Milan to a Champions League win in 2003, scoring the winning penalty against Juventus.

🤔 What would your top six be? Tell us in the comments below! 👇