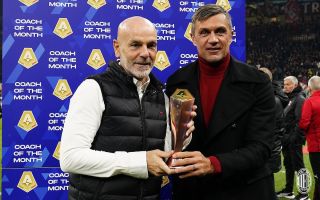 Paolo Maldini has revealed that he wasn’t one for giving big pre-match speeches ahead of the derby games, and reassured fans that there has been nothing but concentration during the build-up.

The Rossoneri head into tonight’s game against their city rivals perhaps being the favourites having won 10 out of their 11 games to begin the season but they have not had the rub of the green in recent meetings. They know three points would send them top of the league but also send a huge statement to the rest of the challengers.

Maldini is a player that knows the derby well as he played in it countless times during his illustrious career, but now he cannot effect the game so he must make do with watching from the sidelines as a director.

He spoke to DAZN before tonight’s game against Inter to describe his emotions before the derby, with his comments transcribed by MilanNews and translated below.

What emotions do you feel tonight? “It’s great, football without fans is another sport. We were born with this idea of ​​football, I think it was the most important motivation. We are very happy for the people.”

Do you see a different derby than last year? “The preparation for these matches is very easy, everyone is super concentrated. The reasons come by themselves. This can lead to too strong attention which can block you. They are all experiences, like the ones we are having in the Champions League where the level and tension rise.”

As a captain, what did you say before entering the field? “The last details are given by the coach, as captain I tried to reassure everyone even if maybe I was burning inside. I have always realised that a coach like Ancelotti who was always calm gave confidence to the team. Ibra? No Ibra is tense, very tense (laughs).”

Your favourite derby? “There are many, the first I played, the only one in which I scored, but the 2003 Champions League semi-final is very important.”