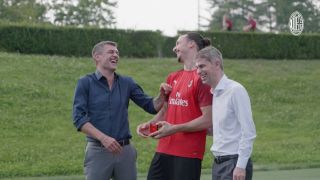 AC Milan technical director Paolo Maldini has given an exclusive interview to Bein Sports France about a number of different topics.

Maldini continues to be hailed for the impressive work that he has done as a director, helping restore the Rossoneri to being title challengers with clever moves on the market that has seen an injection of young talent complimented by experience.

Speaking to Bein Sports, the former Milan captain spoke about the return of Zlatan Ibrahimovic and a potential renewal, as well as the signing of Theo Hernandez and other subjects.

“We have one of the youngest teams in Europe. The team needs a leader like Ibrahimovic. We tried to reinforce in the mercato with experienced elements,” he said (via MilanNews).

“We have tried to sign Zlatan from LA Galaxy in 2018, even. About his renewal, he has told us that it depends on his body. I don’t see why he can’t continue with us for another season.”

One of the signings he has been praised extensively for is that of Theo Hernandez, who arrived from Real Madrid in summer 2019 and has become one of the best left-backs in the world.

“He is a player who had already won the Champions League, he was lacking a little. I didn’t want to hear all the things they had told me about him but I wanted to talk to he looked him in the eyes. I found a sensitive guy. I told him that he would have to work so hard.

“Hearing me say these words I believed in him, the club believed in him. With Leao it was our most expensive purchase of the year The response on the pitch has been exceptional, I always tell him that he has to plan to play as a starter for the national team and he must aspire to be one of the three best full-backs in the world.”

Maldini spoke about the renewal situation regarding Donnarumma and Calhanoglu, as well as Ibra.

“We have three players expiring, and we also have contracts expiring in 2022. But it is normal practice, we are working. I always say that two of us need to be happy to reach an agreement, the players are professionals and they think about 100% in the field. The hope is to find an agreement soon.”