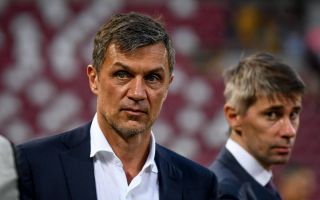 AC Milan director Paolo Maldini has lifted the lid on a number of contentious issues regarding the club, including signings and renewals.

All eyes are on how the Rossoneri will follow up their impressive 2020-21 season during which they finished in second place in the Serie A table and secured a long-awaited return to the Champions League. With Inter, Atalanta, Napoli, Roma and Lazio all having won already in the first round, the pressure is on Milan to kick things off on the right foot themselves.

That being said, we are currently in an interesting phase where the transfer market is still open and therefore there could be a different team taking to the field before the end of August, something which the former club captain is well aware of.

Maldini spoke to Sky Italia and discussed a number of different topics before the game against Sampdoria, with his comments transcribed by MilanNews and translated below.

On Ibrahimovic and Giroud together: “The idea is to always let the best players play. If they are okay why shouldn’t they play together? They have similar physical structures but have different characteristics and Ibrahimovic can also go around the other striker acting as an advanced playmaker”

On the strength of the team: “We start from last year’s base, so I would say yes. In tonight’s lineup there are 5 pillars missing compared to last year but I would like to venture that this team is stronger. We will have to finish some things on the market and then the team will be complete.”

On the return of the fans: “We have already had the fans in the friendlies and I must say that at the beginning you are almost blown away by the noise. For all the players and for the coach it is essential to have the fans at the stadium because otherwise it is another sport. It is beautiful and incredible. ”

On the Pellegri deal: “It is no secret that Ibrahimovic is 40 and Giroud is 35. We are one of the youngest teams in the league and we want to continue on this path this season as well. We must also look to the future.”

On Kessie’s renewal and other operations: “I think there is a common line in talking about a renewal and a signing. We must act following sustainability, without going beyond certain lines dictated by the ownership. In the past we have done it and we have paid. Both the renewals of players that we have not been able to. to do, both acquisitions will be made following this spirit. I do not start with preconceptions for players or about players who have played in other leagues, I am open to many solutions

On young players and reserves: “Even players like Krunic and Tonali have brought with them a lot of preconceptions. They were important players last season and we expect our young players to be more ready than last year.”

On the Scudetto dream: “I’ve always liked dreaming. Then, as Capello says, it’s right to be realistic but a dream is not denied to anyone.”