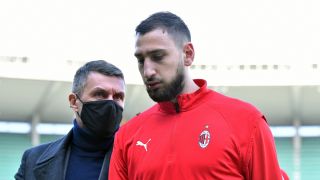 At the end of last season, Gigio Donnarumma decided not to renew his contract with AC Milan and that prompted the signing of Mike Maignan. The Italian goalkeeper, meanwhile, ended up joining Paris Saint-Germain.

It was a huge blow for Milan to lose their star on a free transfer, there is no doubt about it, considering his age and market value at the time (which was boosted by the Euros). However, they have managed to continue life without the No.99.

In his long interview with Sette, the weekly edition of Corriere Della Sera, Paolo Maldini was asked about the departure of Donnarumma. He aimed a dig at the goalkeeper but also stated that he understands the decision.

“Sometimes I know I seem almost fatalistic. Gianluigi Donnarumma is a great person, full of emotion. I believe that in an ideal world, the only real motivation of a football player should be passion. But if your goal is to get social redemption, and money to give to your family, who tightened their belts for you in your childhood years well, those are motivations too.

“This has to be understood and respected. To achieve certain results and a certain stature as a player, motivations are fundamental. It may happen that the needs of a player do not combine with those of a club. There are those who manage to wait, and those who are in a hurry. It’s not up to me to judge certain choices,” he said as cited by MilanNews.

As said, Milan have done pretty well without Donnarumma this season, although Maignan got injured after a brilliant period. The Frenchman has been back in action since a few games back and will be hoping to recover his form.