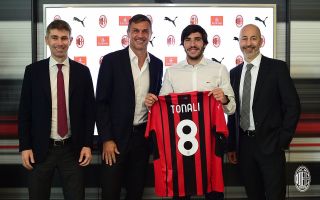 Sandro Tonali was brought in on an initial loan deal in the summer of 2020, joining his boyhood club AC Milan. And despite a rather average first season, he was redeemed by the Rossoneri.

The negotiations with Brescia over the permanent deal took quite some time, though, as Milan were able to get a big discount and Tonali also agreed to lower his salary. It has turned out to be a great decision, given his performances this season.

Indeed, he looks like a completely different player and he’s performing on a very high level week-in week-out. Speaking at the 2021 AIMC online meeting (via MilanNews), Paolo Maldini shared his thoughts on the transformation.

“The player who has shown a totally different face from last year is Tonali. He was born in 2000, he came with a loan, meaning a lot of pressure on his shoulders. He arrived after having had Covid, a somewhat particular season.

“He didn’t do very well immediately but we saw glimpses of enormous qualities in this boy, who is also a super Milanista. This doesn’t hurt either. In our opinion, he is the player who has made the strongest improvement,” he stated.

Tonali played really well against Roma and given the absences of Ismael Bennacer and Franck Kessie, he needed to show his leadership. Stefano Pioli is surely delighted that he can count on the 21-year-old, because who wouldn’t be.