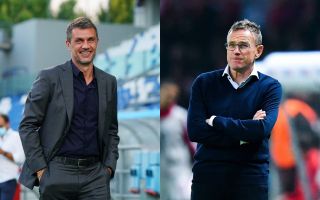 Maldini reveals he was ready to quit if Rangnick arrived; explains why he stayed and what changed

AC Milan technical director Paolo Maldini has revealed that he was ready to leave when it appeared Ralf Rangnick was set to arrive, but decided to stay out of loyalty to the team and the club.

It feels like such a distant memory now, but every source reported that Rangnick was going to arrive during the last summer, but towards the end of the pandemic-extended season the situation changed.

In fact, things seemed to very quickly fall apart. As Milan went on a fantastic run of results, reports broke during the first half of a 2-1 win over Sassuolo claiming Pioli would be staying on as boss and that the proposed arrival of Rangnick was cancelled.

The memories of a year ago are still fresh for Maldini, who has revealed that he was absolutely ready to quit if things had been followed through with and the former Red Bull chief had arrived.

“I remember we talked about it here (in his office), him and I (Boban). I told him that I was tired, that I had to say things. And so I publicly said what felt right. The same thing he had made it later,” he said (via Calciomercato.com).