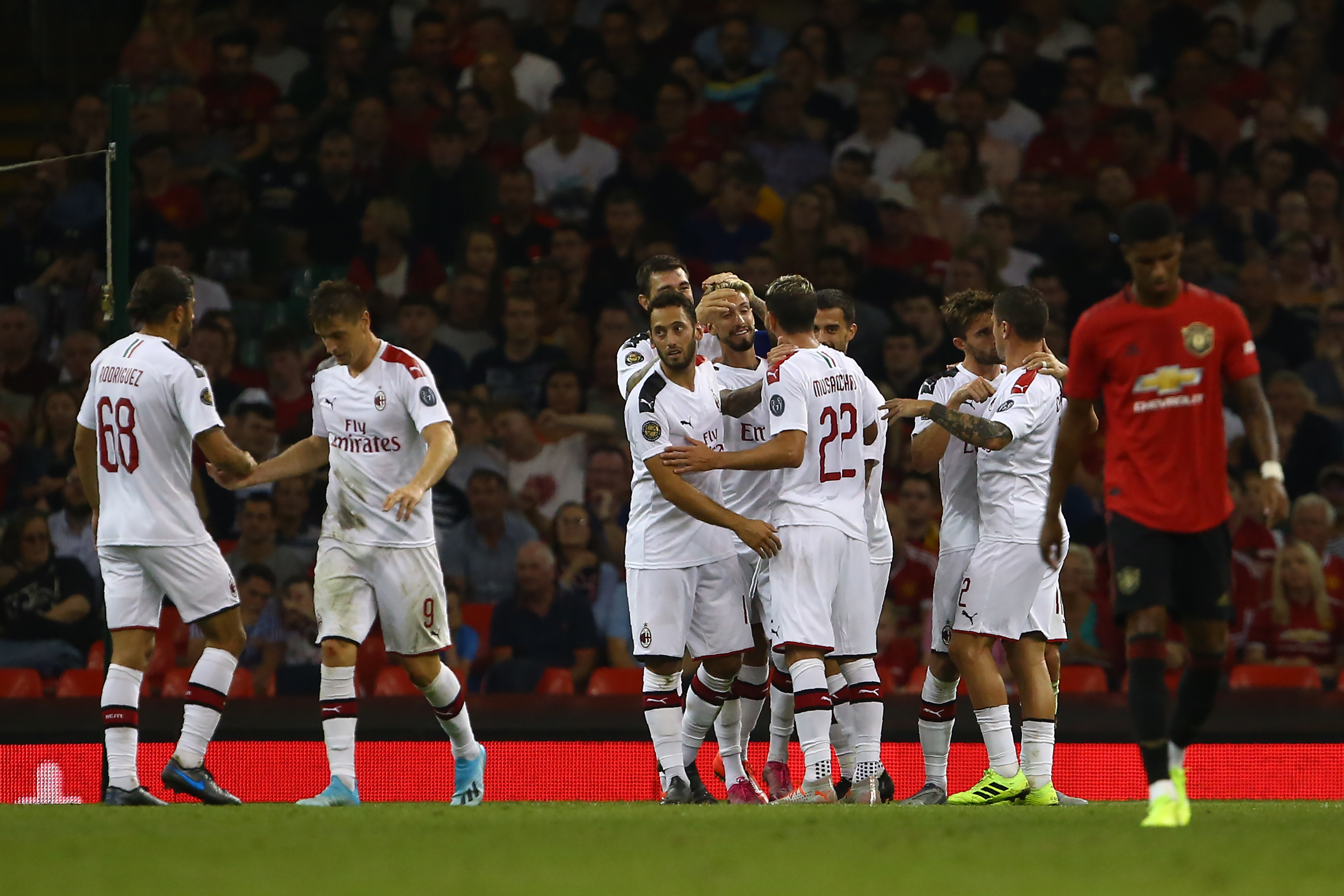 AC Milan were defeated on penalties in their final game of the International Champions Cup against Manchester United.

After Rashford had given United an early lead, Milan hit back through goals from Suso and Samu Castillejo either side of half-time.

Jesse Lingard levelled in the second half and the game went to penalties, with Daniel James netting the decisive spot kick for the Red Devils after Daniel Maldini had missed.

With the roof closed at the Principality Stadium in Cardiff it was the ‘home’ side who started marginally better, with Andreas Pereira having the first shot of the game in the ninth minute but rolling it comfortably wide.

Gianluigi Donnarumma was forced into his first save three minutes later as Marcus Rashford found space to shoot; his effort in the end parried away safely.

Milan began to make small inroads and twice could have executed better in the box as Krzysztof Piatek and Samu Castillejo both miscontrolled.

However, it would be United who took the lead. Rashford again was given space to run into from the left and he breezed past Davide Calabria, firing off a shot which deflected to beat Donnarumma low to his left.

There were no shortage of fiesty challenges despite it being a friendly, with Fabio Borini getting stuck in on multiple occasions and Mateo Musacchio being caught late by Nemanja Matic.

Marco Giampaolo’s side then began to come into the game more, and Suso curled an effort narrowly over and wide from around 20 yards.

The Spaniard would not be denied a second time though; he was again given time and space on the edge of the box and managed to beat De Gea with a curling shot inside the left post to level the scores.

De Gea was forced into action yet again six minutes before the break. A teasing cross from his compatriot Suso was almost met by Piatek, however the bounce forced him into an impressive reaction save to keep the honours even.

Piatek was again the architect of the final chance of the first half; the Poland international making an incisive run in behind, drawing De Gea out of his goal and forcing an acrobatic punched save from a dinked effort.

Milan’s number nine had a big chance to start the second half when he was put through on goal in the 50th minute, however rather than lifting his head up he chose to fire straight at De Gea – possibly because he thought he was offside.

Donnarumma had been reasonably quiet since the early stages but was called into action just before the hour mark as he got down well to save a Victor Lindelof header.

Piatek almost found himself in the clear when he produced a sublime first touch to go past Luke Shaw, but the defender rescued the situation with an outstanding challenge.

However, from the resulting corner the Rossoneri took their first lead of preseason. The corner was played short and Suso provided yet another pinpoint cross which was met by the unlikely head of Castillejo; the ball nestling in the bottom corner to make it 2-1.

GOOAAAALLLLL! Castillejo might have got a flick on it, but it will go down as an own-goal by Lindelöf. 2-1 to Milan! pic.twitter.com/2a5g5eQZb7

Andre Silva was introduced – along with Rade Krunic and Pepe Reina – and he had a chance straight away but couldn’t direct his header on target from Borini’s whipped cross.

United’s fitness began to play a part as they started to press, and they found an equaliser with just under 20 minutes left through Jesse Lingard. He was found in behind as Calabria lost his man, making no mistake with an angle low finish into the bottom corner.

There was a pleasing moment inside the final ten minutes as Giacomo Bonaventura came off the bench to mark his return, along with academy products Marco Brescianini and Daniel Maldini.

Ole Gunnar Solskjaer’s side tried to turn the screw on the counter late on and had a golden chance to win it when Daniel James was brought down 20 yards out, but Fred curled the free-kick comfortably over. Lingard also rolled an effort straight at Reina not long after as penalties beckoned.