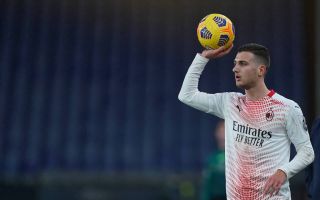 Man Utd loanee criticised by media in first league start for Milan: “He starts well, then hides” – the ratings

Diogo Dalot was far from convincing in his first league start for AC Milan as he did not receive a favourable score from any of the major outlets.

Head coach Stefano Pioli sprung a surprise an hour before kick-off at the Marassi against Genoa as he named Dalot in the starting XI instead of Theo Hernandez at left-back, with the Frenchman battling some muscle fatigue.

In our player ratings Dalot scored a 6 out of 10, with the following assessment: “Decent from the full-back, nothing more, as he really didn’t add much to the attack until the final 15 minutes. Did his duties at the back but you want to see more from him in other phases.”

Two newspapers gave him a score of 5 out of 10, namely La Gazzetta dello Sport and Tuttosport. The former said: “He starts well, then hides. On his side the Griffon slips through”. The latter remarked: “A bit too frenetic, often he finds himself out of position”.

Calciomercato.com gave him a 5 out of 10, and finally MilanNews awarded him a 5.5 with the comment: “He is not Theo Hernandez, but against a team as closed as Genoa he cannot be so planted on the pitch.”