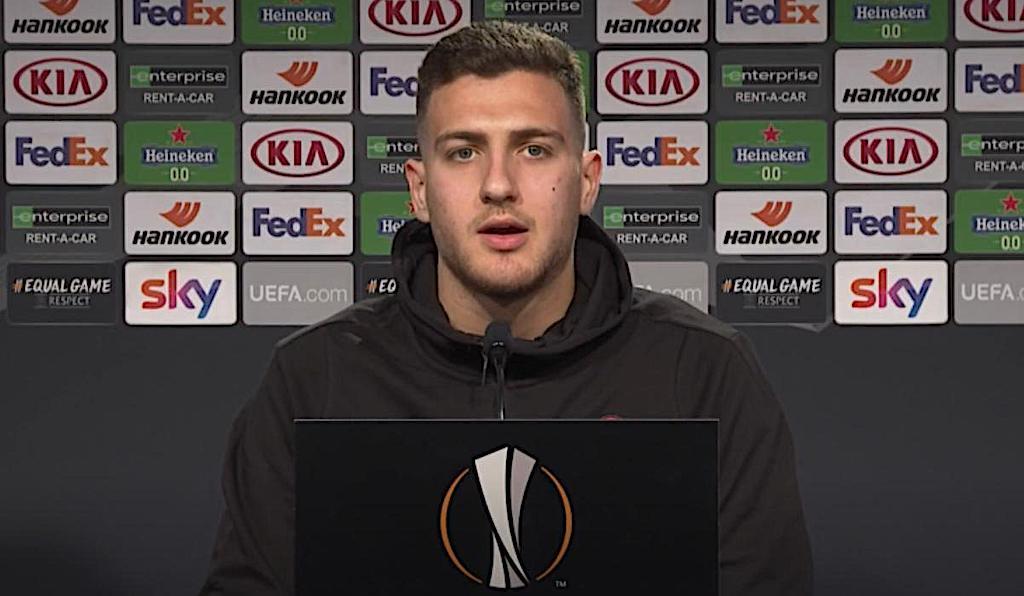 Man Utd loanee Dalot on start to life at Milan: “The club is amazing, I’m happy to be here”

Defender Diogo Dalot has insisted that he is ‘very happy’ to be at AC Milan, and insists he and his team-mates are ready to take on a ‘motivated’ Celtic.

The Rossoneri know that they can take a big step towards qualification with a win against the Scottish champions, as three points at San Siro and Lille beating Sparta Praha would be enough to see Milan through.

They face a Celtic team who are in relative chaos too, with calls for manager Neil Lennon to be sacked after a run of two wins in 10, which has resulted in slipping 10 points behind their bitter rivals Rangers in the league albeit with two games in hand.

Dalot spoke to the media ahead of Thursday’s clash with Celtic, with the questions and his responses transcribed by MilanNews.

What do you think of your European League campaign so far and that of the team?

“We have certainly had good performances. It is a difficult competition, but we are doing well,” he said.

How is your acclimatisation to Italian football going?

“It’s been a great few months in terms of adaptation. Italy is similar to Portugal. The club is amazing, I’m happy to be here.”

What do you think of Celtic?

“We know Celtic has a good history in European competitions. It’s a tough match against a very good team. They’ll be coming motivated.”

Is there anyone who is helping you to learn Italian?

“I come everyday with desire to train and play. The team-mates help me with the language and adapting to the city. I’ve been trying to adapt quickly, I’m learning Italian. The players, staff and everyone else at the club have been very helpful to me.”

What do you think of Italian football? How’s it going with Pioli?

“It’s fantastic to learn the tactics of the game here in Italy. Having a coach close to the player always trying to teach and explain is great. Our relationship is not just manager-players. This helps me to improve.”

Is the awareness in you that you can do well both in the league and in Europe?

“We have a very good philosophy in terms of daily work at this club. We think game by game, we will try to win against Celtic, then we will shift our attention to the next game. This is the right mindset, and with it we can achieve great things this season.”

Can this Milan also compete for the Europa League?

“Milan is a big club, they are known for playing at the highest level of football, the Champions League, it’s a goal for us. Hopefully, with the right attitude, we can put Milan back to the top of Europe.”