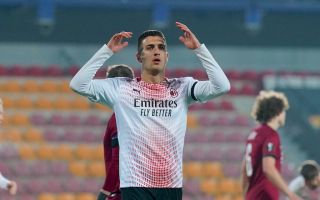 Diogo Dalot has insisted that he has an ‘extraordinary’ relationship with head coach Stefano Pioli as he put in another solid display on Thursday night.

He was one of the higher scorers in our player ratings from the 1-0 win over Sparta Praha, as he was awarded a score of 6.5 out of 10 as what was essentially a second team kept a clean sheet.

The comment attached to his performance reads: “The Man Utd loanee impressed this evening with an asserting performance in both phases of the game. Made no mistake at the back and also contributed a lot in attack, including the assist to Hauge.”

Dalot was interviewed by Sky Italia after the game, with his comments transcribed by MilanNews.

On Hauge: “He is in excellent form, he has continuity, he is a great signing for Milan. The whole team helps him.”

On Pioli: “He is a fantastic coach, our relationships with him are extraordinary, the way he communicates with us, that’s why we are playing so well. It is a really great team.”

On Milan: “It’s too early to set target, we go step by step. We all dream of winning trophies, why not dream of the Scudetto or the Europa League, in all competitions we participate to win. We know that all competitions are difficult.”

On Mourinho: “He has been one of the most important coaches in my short career so far, it has been a great experience. Right now he is the Tottenham coach, I am completely focused on Milan.”

He also spoke to Milan TV after the game.

“We came here with the intention of winning and then waiting for Lille’s result to see if we could get first. It was a difficult match on a tough field, we proved that we are not only 11 players but a united team,” he said (via MilanNews).

On Kalulu and Leo Duarte: “We are not only 11, Leo and Pierre were fantastic today. It is the demonstration that we are a great group.”

Prior to the game in Prague he had played more as a right-back than on the opposite side for Milan, though his performance on the left in the first game against Sparta was excellent, as he got a goal and an assist in that.

“Left or right is indifferent to me, the important thing is to play. Today we did a good job.”