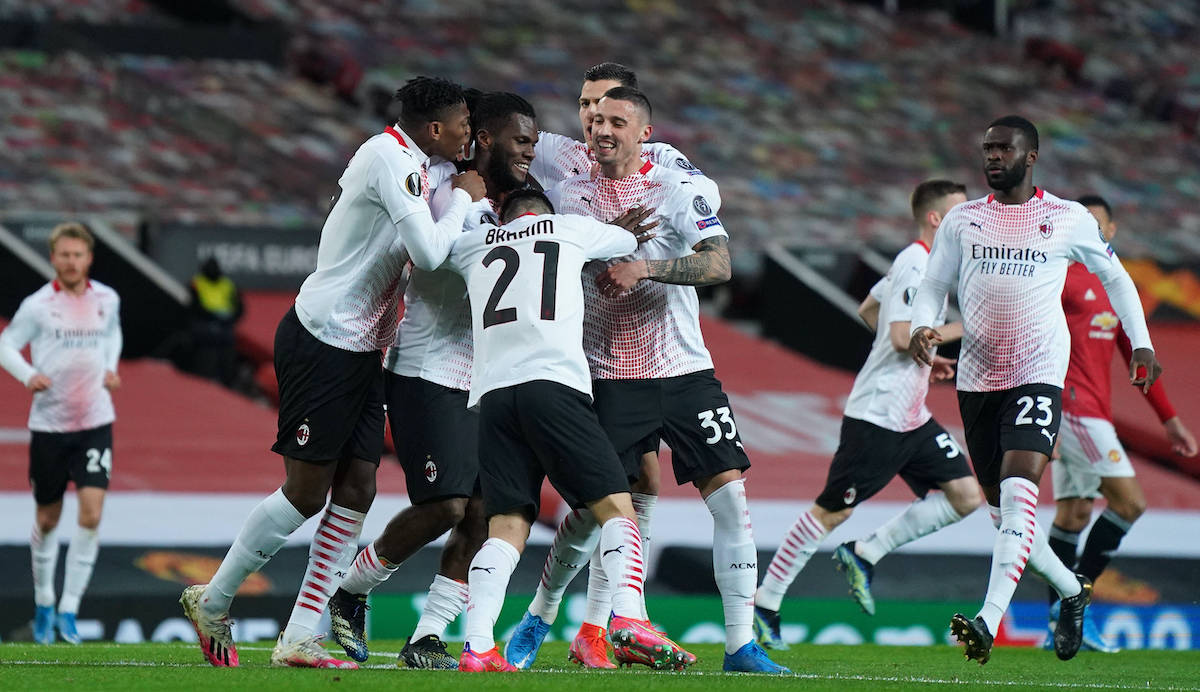 AC Milan earned a 1-1 draw in the first leg of their Europa League last 16 tie against Manchester United with a spirited performance.

Franck Kessie had the ball in the back on the net in the first half with a splendid half-volley that was ruled out by VAR in a decision that looked very contestable based on replays.

Head coach Stefano Pioli had to make virtue of necessity as Milan were without Theo Hernandez, Ismael Bennacer, Hakan Calhanoglu, Ante Rebic, Zlatan Ibrahimovic, Alessio Romagnoli and Mario Mandzukic for the game, which saw the likes of Rade Krunic, Soualiho Meite, Diogo Dalot and Brahim Diaz get the nod.

Milan were the first team to put the ball in the net as Leao showed the danger of his pace in behind, racing onto a ball over the top and finishing past Henderson in the United goal at the near post, but the flag rightly went up as the Portuguese forward had strayed a couple of yards offside.

The home side had their first attempt on goal three minutes later as a cross from Telles on the left side was brought down by Martial, who forced Donnarumma into what was, in the end, a routine palm over the bar.

Straight up the other end, Krunic had a chance to recreate his heroics from the weekend when he let fly from just outside the box, but dragged his shot wide of the far post as Henderson let it go.

It was Milan who had the ball in the net again in the 11th minute as Kessie took a touch from a throw-in and thumped the ball into the far corner as it sat up for him nicely just inside the box. However, VAR decided to intervene for handball, though the replay made it look like a questionable call.

The Rossoneri continued to dominate the early exchanges as their press cut off their hosts’ attacks early and the passing combinations in United’s half caused issues.

Krunic again found himself in shooting range on the 25-minute mark as he was found in space on the left edge of the box, though he perhaps should have fired initially rather than cutting inside and seeing his shot deflected and gathered by a stretching Henderson.

Moments later, a ball through to Calabria found the full-back in space in behind though he couldn’t get a shot off before he was crowded out by Bailly and Wan-Bissaka.

The alarm bells were ringing for the Red Devils once again as Brahim Diaz led a counter on the half-hour mark before spreading the play to Saelemaekers, who cut inside and forced a rather easy save from Henderson, though the replay showed he was clipped by Matic and could have gone down.

The home side absolutely should have taken the lead a few minutes before the break as a header was glanced at the near post over to the far stick by Fernandes and Maguire missed from a yard out, somehow shinning the ball against the post and it looped to safety.

The last half-chance of the first half came as a deflected cross from Saelemaekers on the left wing found Brahim at the far post and his backheel into a dangerous area just fell short of Meite.

Despite Milan’s first half pressure, it was United who took the lead with the first real chance of the second half. A lofted ball over the top found former Atalanta man Amad Diallo unmarked but with his back to goal, and the winger got enough of a connection to send the ball over Donnarumma and into the net after a perfectly timed run.

Milan continued to fashion openings on the break and the latest one fell to Brahim as he picked up a second ball and started barrelling towards goal, yet Maguire was on hand to block his drive from 18 yards.

Henderson was called into action once again as Kessie scuffed an effort at the near post when the Ivorian arguably could have done better after Saelemaekers had found him in space on the left corner of the box.

Krunic kept picking up the ball in threatening areas and the referee kept making errors as he saw a shot from the edge of the box in the 63rd minute deflected over with what was a good block, but the referee whisted for a goal kick.

Again the Bosnian had a huge opportunity to score in his second straight game as Calabria found him free at the far post, yet he somehow headed over the bar from a few yards out despite a clean connection.

A chance fell to Saelemaekers on the next attack as Kessie won the ball back high up the pitch and squared to the Belgian on the edge of the area, though he scuffed his attempt and Henderson gathered with ease.

A roll of the dice came from Pioli midway through the second period as Brahim and Saelemaekers made way for Sandro Tonali and Samu Castillejo.

Dan James could have padded the advantage for United with just under 20 minutes left as a one-two allowed Fernandes to square across the face of goal but the Welshman couldn’t connect cleanly with the ball and shanked it wide first time with the goal gaping.

Calabria made way not long after with Pierre Kalulu coming off the bench to replace him at right-back.

The closing stages of the game saw United press high to try and get what would have been a crucial second goal on the night, and on the few occasions Milan carves chances to cause problems at the other end the quality simple was not there.

Just as it looked like the Rossoneri would leave from Old Trafford empty handed, Simon Kjaer rose at the near post to direct a header towards goal that Henderson should have done better with but could only flap into the roof of the net while backpeddling.