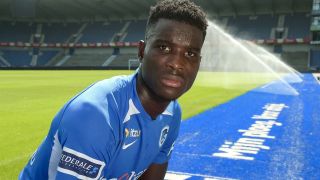 AC Milan and rivals Inter are both big admirers of Paul Onuachu and could land him in a cut-price deal, according to a report.

Marca (via TMW) reports this morning that the two Milanese giants are keeping a very close eye on Onuachu given that he has scored 9 goals in the first 9 rounds of the Belgian Jupiler League, averaging a staggering one goal every 71 minutes.

He netted 35 goals last year across all competitions and is well on his way to matching that tally with 11 already netted in 2021-22, and that is why Genk are braced for bids from some top clubs.

Marca confirms that Atletico Madrid are interested in the 27-year-old but the scouts of Milan and Inter have already been to see him live several times.

Last summer Genk valued him at €30m but in January the valuation will be lower, because Onuachu has told the club that it wants to leave to play in a more competitive league, so €20m could be enough.