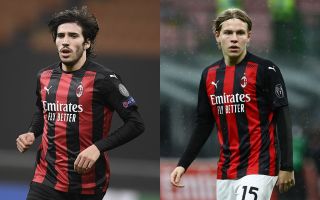 Marchetti: The latest on Milan and the future of Hauge, Pobega and Tonali

Milan are working on several operations on the market and we are not just talking about signings, but also departures. After all, the Rossoneri have a few good players that could leave and result in some cash to reinvest.

Milan have already spent a good amount on the market, securing the services of Mike Maignan and Fikayo Tomori on a permanent basis. They are also expected to bring in Brahim Diaz, albeit on loan but with an option to buy.

Speaking live on Sky Italia, as cited by MilanNews, Luca Marchetti shared some brief updates on the Rossoneri’s transfer strategy. Above all, he spoke about the future of Jens Petter Hauge, Tommaso Pobega and Sandro Tonali.

“The negotiation between Atalanta and Milan for Pobega continues and the parties are closer. Eintracht Frankfurt’s interest in Hauge is noted, while as regards to Tonali, Milan and Brescia are close to an agreement with a further discount in favour of the Rossoneri,” he stated.

It remains to be seen if Milan will part ways with Hauge on a permanent basis, but the departure of Pobega seems pretty certain. The youngster doesn’t fit the 4-2-3-1 formation and will also generate a full capital gain.