After Soualiho Meïté, Milan have secured their second signing of the January mercato, and it’s none other than Mario Mandzukic.

Many know of him since his time at Juventus, Bayern Munich and Atletico Madrid, but if you don’t then we have provided a player profile on the 34-year-old Croatian.

Born in Slavonski Brod in former Yugoslavia on May 21st, 1986, Mandzukic started his career at TSF Ditzingen after his parents fled to Germany during the Croatian War of Independence. At the age of ten, his family returned to Croatia where he started playing for Marsonia.

He later climbed in the Croatian football ranks and ended up playing for Dinamo Zagreb in 2007, where he made a total of 112 appearances and won three league titles and two Croatian cup titles before signing for Wolfsburg in 2010.

At Wolfsburg, he had an immediate success and was signed by Bayern Münich only two years later, where he spent the next two years before moving to Atletico Madrid. His stay there was short and after one year he joined Juventus for €19million, where he spent the next four years. His final destination before joining Milan was Qatari club Al-Duhail, which he left in July 2020.

Across his career, Mandzukic has been a serial winner and has won 23 titles with his teams, including the Champions League, Bundesliga, and Serie A. On an individual level, he’s won Croatian Footballer of The Year, Croatian Sportsman of The Year, The Croatian leagues Player of The Year, and become joint-top scorer in the 2012 Euros. He’s also been awarded the Order of Duke Branimir for helping promote Croatia in international relations.

Mandzukic is a notorious goal scorer. He scored double-digits in twelve consecutive seasons for Dinamo, Wolfsburg, Bayern, Atletico Madrid, and Bayern, until he joined Al-Duhail.

Even at the end of his Juventus stay when he was a bench player/super-sub. He was also always very appreciated by his managers, his team-mates, and the supporters as he gave it 120 percent whenever he was given the nod to play.

The 190cm striker has never been the type of player you use to run on spaces to create danger. His biggest threat is his intelligence on the pitch. He reads the play, anticipates his positioning from where the ball is going to be and is clinical when he gets the chance.

Mandzukic – at least before he joined Al-Duhail – been one of the most lethal players in the world in the box. He’s brilliant at being at the right place at the right time to convert.

But by signing Mandzukic, Milan doesn’t “just” get a great box-player. The 34-year-old is a true leader and leads both by words and by example. You rarely see a player work harder than him on the pitch and when someone’s performance isn’t cutting it, you can be sure that they will hear it from Mandzukic – just in the same way as they hear it from Zlatan Ibrahimović. The Croatian has very high standards and demands on his teammates. He is a junkie and his drug is to win.

Since his senior debut for Croatian side Marsonia in 2004, Mario Mandzukic scored double-digits (across all competitions) for twelve consecutive seasons until leaving Juventus for Qatari side Al-Duhail in 2019. That consistency is crazy good. 33 goals in 89 Croatia caps as well.

There are many strengths in Mandzukic’s repertoire, but the main ones are his physical strength, his anticipation, his positioning, his mentality, and his intelligence.

His physical strength and size can be of big use for Milan in more than one way. It enables Mandzukic to be a focal point for the attacks in the same way Zlatan is.

He can hold onto the ball when needed and he can collect the ball and further distribute it forwards to the wingers or another teammate. This is something Milan has lacked whenever Ante Rebic, Rafael Leão, or Lorenzo Colombo has filled in for the 39-year-old super Swede.

As for the mentality, Mandzukic is of the same school as Ibrahimović. They will stop at nothing to win. Even if it means to play dirty or push their teammates a bit too hard at times. It’s not meant to hurt anybody, but in their minds, there is only one objective: to win.

This is also something Milan has lacked upfront whenever Zlatan has been out with Covid-19 or his muscular injuries. And at times, Milan really missed that. In Ibra’s absence, the attack looked rather lacklustre or uninspired at times, but that will most likely not be the case with Mandzukic on the pitch – something very important for such a young team as this Milan side.

But most of all, Mandzukic is a goal scorer. That’s essentially what he’s signed to do; score goals. You can count on him to never back down from a duel in the opponent’s penalty area, and he’s together with Zlatan Ibrahimović, Cristiano Ronaldo, and Leonardo Pavoletti the best heading finishers in Serie A. Might’ve forgotten someone, but the point is that he’s amongst the best when it comes to sending crosses onto in the box.

It’s hard to know what has happened to Mandzukic in the Qatari league, as there are barely any broadcasters for it in Europe. But going by what he looked like before he left Juventus and by the assumption that he’s declined physically by not playing in a long time (left Qatar in 2020 and been without a club since).

The big question is if he’s physically up for the challenge. Will he be able to have the same incredible work rate as he had before? How many minutes does he have in him? Mario believes he will.

It won’t matter much if he’s going to be used up top in Stefano Pioli’s 4-2-3-1 system, but it might be tougher if he will be deployed as a left-winger which he sometimes was at Juventus.

As a striker, he won’t have to work as hard as the midfield, and LW, AM, RW are doing most of the defensive work. The striker’s biggest mission is to be free whenever needed and to win the aerials that are thrown his way.

In the box, he can rely on his extreme intelligence by being at the right place at the right time and anticipating where the ball is going to be, instead of running around. It will not pose a problem. 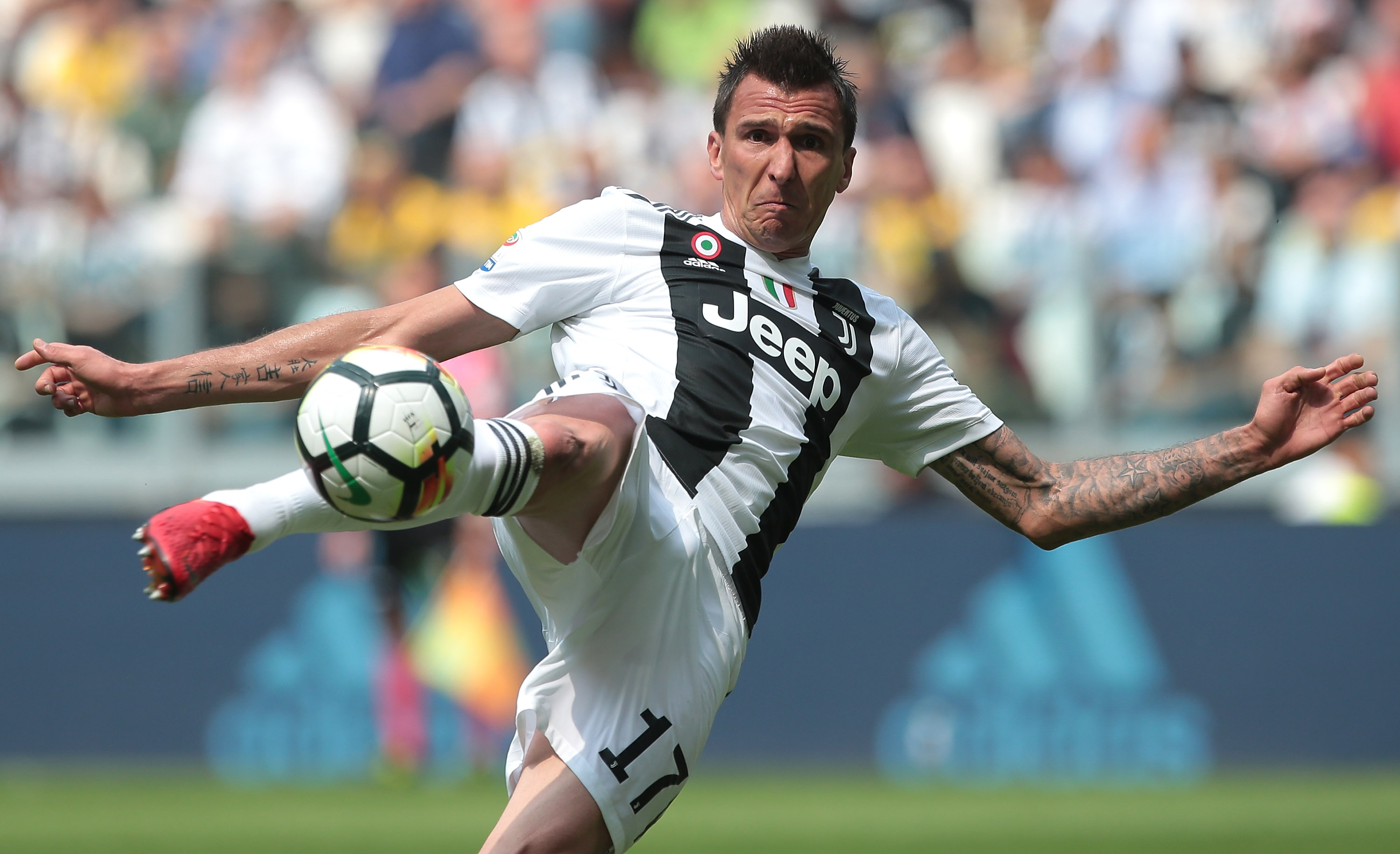 As a left-winger, it might be a bigger problem depending on what his physical status is. The position required a lot of running up and down the wing and a lot of defensive work on top of the offensive duties.

But with that being said, due to the strictness and focus on the detail that the current management has, I think the Rossoneri fans can be sure that extensive research has been made on what physical status Mandzukic has. This management wouldn’t spend a dime if they weren’t sure that they would get a return on their investment. And apart from that, Mandzukic really doesn’t seem like the type of man to be lazy when he’s without a club. The feeling you get is that he’s trained at least as hard as he’s done when he’s been at a club now when he’s been without one.

Signing Mario Mandzukic is a low risk/high reward signing. Milan doesn’t pay a lot for the 34-year-old, it’s on a short-term deal, and he knows that he’ll be an Ibra deputy. If it doesn’t work out, not much has been lost. But if it works out for Mandzukic at Milan, a lot has been gained.

He’s an experienced serial-winner and a true leader. Even if he doesn’t deliver masterclasses on the pitch, you can be sure that he will make an impact on the training ground and by having his presence in the team. He’ll set the bar high, which is exactly what his Milan team needs – especially if Ibra is out.

This has potential to be a 9 or 10/10 signing. If he works out, it’s a masterstroke of business. But even if he don’t, it’s a good short-term solution. The score given below is only due to us knowing what status he’s in and how fast he’ll be able to make an impact

Tags AC Milan Mario Mandzukic
Related Articles
Watch: Relive the final six minutes of Milan’s dramatic win over Empoli
2 October 2022, 15:10
MN: Hernandez continues individual training ahead of Chelsea and Juve clashes
2 October 2022, 14:48
Ambrosini on Empoli-Milan: “Perhaps we will remember this at the end of the season”
2 October 2022, 14:30
Serie A Standings