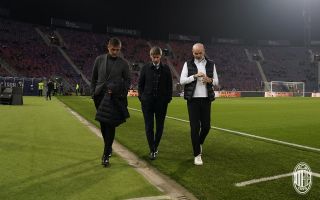 AC Milan sporting director Ricky Massara has confirmed that talks are on with Stefano Pioli over the extension of his contract, and was not drawn on the potential of a Scudetto win.

The Rossoneri are looking to get back to winning ways tonight when they face off against Bologna a few days after their 1-0 defeat against Porto in the Champions League. Victory against their former coach Sinisa Mihajlovic would mean retaking top spot until tomorrow evening at least.

Massara spoke to Sky Italia before tonight’s game against Bologna at the Stadio Renato dall’Ara, with his comments transcribed by MilanNews and translated below.

“We are very satisfied, there is great merit from the team, the players and the coach who does not make the absences felt. We are proud and happy: we want stay up there,” he said.

On Ibrahimovic: “We are super happy to embrace Ibrahimovic from the first minute, we missed him. He will make a huge contribution to the team.”

Pioli has a contract with Milan which will run out next June, having signed an extension after the first lockdown when it seemed as though Ralf Rangnick would arrive to replace him. It seems there is no rush in discussing the extension of Pioli they have a clause for an automatic renewal until June 2023.

On the renewal of Pioli: “Congratulations for the 100 games coached [with Milan], all of a high level. We are very happy, there is great harmony and sharing in continuing this path. We are convinced that we will continue for a long time with Pioli.”

On the Scudetto dream: “Let’s think one game at a time. We focus on this: Bologna are strong and the best Milan will be needed to win.”