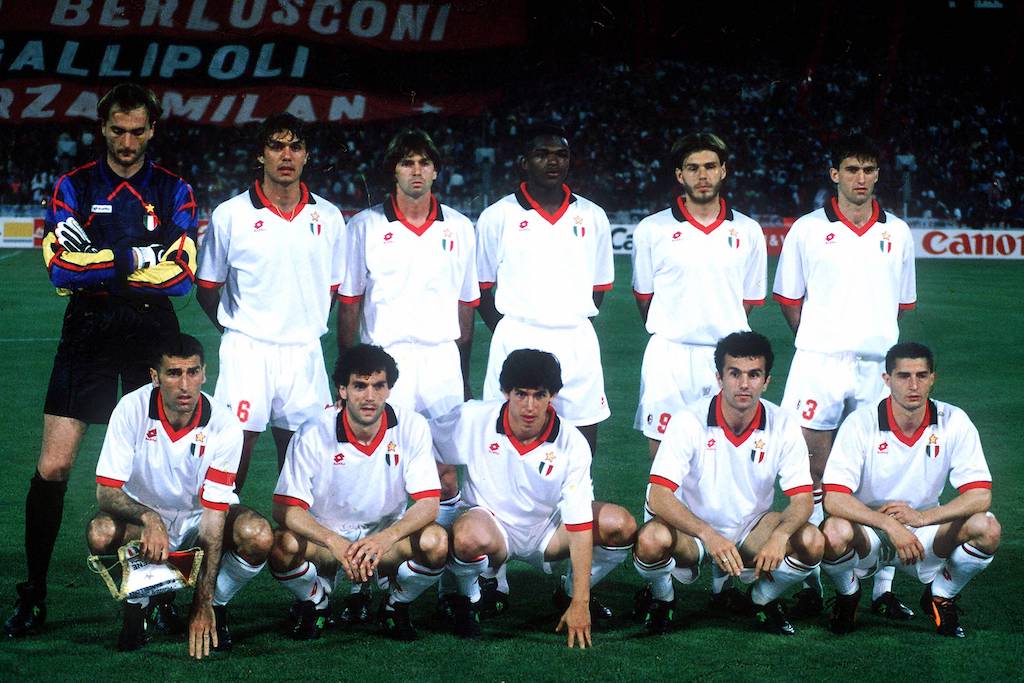 Daniele Massaro and Mauro Tassotti have looked back at AC Milan’s 1994 Champions League final win over Barcelona in Athens.

May 18 1994 is a date etched in the memories of so many Milanisti as the night of what is arguably the club’s biggest triumph.

Milan travelled to the Greek capital without the injured duo Marco van Basten and Gianluigi Lentini. Franco Baresi and Alessandro Costacurta were suspended while Ruud Gullit and Frank Rijkaard had left, leading Milan to be regarded as huge underdogs.

Johan Cruyff said before the game: “Barcelona are favourites. We’re more complete, competitive and experienced than [the 1992 final] at Wembley. Milan are nothing out of this world. They base their game on defence, we base ours on attack.”

How wrong he was. Daniele Massaro’s brace before half-time had the Catalan side stunned, and Dejan Savicevic’s ridiculous lob plus Marcel Desailly’s finish meant Milan were four up before the hour mark and coasted to their fifth European Cup/Champions League title.

Massaro – who scored a match-winning brace – relived those unforgettable memories.

On the comments of Cruyff and Barcelona : “After winning the league it is normal to do things even unconsciously. We saw and read and this charged us even more,” he said (via MilanNews).

“At that time Barcelona was the strongest team in the world. Before the game I asked Cruijff, my idol as a boy, for an autograph. Maybe he wouldn’t have done it at the end.

“1994 was an extraordinary year for me and scoring two goals in a Champions League final is something that few have done. I scored many important goals to win the league.

“A short time ago I met Dejan (Savicevic) who told me that he didn’t want to pass the ball for the 1-0 goal but to shoot at the goal. Fortunately, however, I was there and I put it in. Strange that I scored both with my left, because it is not my strong foot.”

Did the players believe before the game that it was possible to win?

“In hindsight I say yes, because of the days preceding and the sweat that fell on Milanello’s grass. No one breathed, we worked aware that we could have done something extraordinary. So much so that that game was later defined as ‘the game of the century’.

On Savicevic’s incredible lob: “When you’re used to seeing extraordinary things done by Van Basten and Savicevic every day, you don’t wonder. When I saw the ball bouncing I thought it would be a good idea I have always had the good fortune to train against the best defence in the world and therefore I was looking forward to playing against others.

On the award ceremony wearing the shirt of Barcelona: “In that game I exchanged my shirt with Koeman. I did not get a replacement from the club, because then the jerseys with the sponsors were not used yet. It was my luck.

“The nice thing is to win with a brace and go up those stairs. I remember very well a hug with Galliani, who I will never stop thanking and it always reminds me of my two goals. ”

On Berlusconi: “Until the last day we were in Milanello, he was always present. Every Saturday he came and had the right words for everyone, whether he was a proprietor or not. I remember returning to the hotel, Galliani passed me the phone and it was the president who thanked me. Then we met him when we returned to Milan for the celebrations.”

Meanwhile, Mauro Tassotti also had his say on the game. He was the captain in the final that day, and spoke alongside Massaro in the video chat.

“We had not arrived very well before the final, in addition to the absences of Costacurta and Baresi,” he said (via MilanNews).

“The problem is that we had won the Scudetto many days before the final and we arrived without a great concentration. Barcelona, ​​however, he had won La Liga the week before and there was great enthusiasm around them.

“We had training problems, with Capello continuing to make plans to figure out who to play. We had a friendly match in Florence, which we lost to Fiorentina. I played part of the game as a centre-back. Desailly was playing badly on purpose, because he didn’t want to play that role. We got to that game as underdogs. We weren’t inferior to them on paper, but approaching the game was different.”

On the bravado of Barcelona and Cruyff: “I remember that the words of Cruijff and the attitude of Barcelona had done nothing but give us further charge. Cruyff was an idol for me.

“I remember that we were in the room with Paolo (Maldini) and we said: ‘But what are they doing? They are really crazy to say certain things and to take the photo with the cup.’ We really came to the field with a great charge. The friendly matches had been a disaster and I think up to 3-4 days before the game Capello didn’t really know who to deploy in the middle.”

On Savicevic’s 3-0 goal : “He did something extraordinary. At that moment we understood that we had won the Champions League. We won two finals 4-0. Playing such a game so well important it gives prestige to your whole career.”

On the thrill of raising the Champions Cup as a captain: “It is difficult to explain what the sensations one experiences in those moments.

“The best thing is to be able to celebrate with your teammates and fans. They are emotions that remain in your skin. The fact that I raised the cup first did not give me anything more. We are truly overjoyed to have lived such an evening.”

On Berlusconi: “He never let us miss his speeches and his closeness. I think it was the game that he also dreamed of. It was never enough for him to win, but he wanted the domination of the game and winning. He often asked us for goals and not to stop, because we had to win with more goals.

“Was it Capello’s victory? It was, because the approach had been complicated and difficult and he had tried many players as a central defender.

“He guessed everything, it was Fabio’s victory. He was good at preparing games and in exploiting the defects of the opponents. That year we won the championship and the cup, an extraordinary year for all of Milan.”