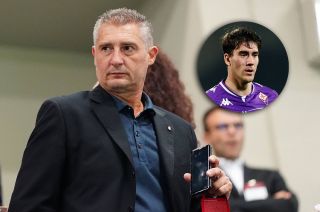 Former striker Daniele Massaro has challenged AC Milan to regain some of their resilience, and backed the idea of signing Dusan Vlahovic.

Massaro has written a column for Libero about the current moment that the Rossoneri are experiencing, with his words relayed by MilanNews and translated below.

“Milan must regain strength even if they is struggling with many absences. The Rossoneri had the wrong approach to some matches and lost some self-esteem. Pioli has never had the full squad available, but the minimum goal remains to enter the Champions League,” he said.

“Zlatan was very important for the young players to make them understand what Milan is and the honour of wearing the Rossoneri shirt. He still makes the difference and his goals can drag Milan into the Champions League.”

The Rossoneri are understood to be in the market for a young centre-forward who could come in during the upcoming transfer window and be a deputy to Zlatan Ibrahimovic, learning from the Swede and allowing him to manage his workload before taking the baton off him when he retires.

La Gazzetta dello Sport (via MilanNews) reported this morning that Dusan Vlahovic is definitely a profile being considered as the Serbian forward is a player whom the Rossoneri ‘like so much’ and Pioli confirmed his admiration for the player, having coached him while with Fiorentina.

On the idea of Vlahovic arriving, Massaro said: “There was also talk of Milan’s interest. He has great skills and is experiencing remarkable growth. I was struck by the hunger he has in improving himself every day. Paired with Ibra it would be a lot… (smiles).”

The struggles of Italian teams in Europa has been deemed a crisis by some fans and sections of the media as Roma are the only club left in European competitions. Reflecting on his own experiences, Massaro believes experience is vital.

“I did not have the skills of Marco van Basten but with the daily sacrifices I managed to be part of an extraordinary team. In my time, the quality that exists was in the Italian league and Serie A was the top, everyone wanted to play in Italy. Now we don’t have young people who have international experience and we are qualitatively inferior to those 4-5 teams that reach the bottom of every year in the Champions League.”

Is there a current striker that reminds Massaro of himself? It seems there is a former Milan player who does.

“Maybe Cutrone, when he came in it made a difference. I’m sorry he didn’t understand what he missed, leaving Milan. Everyone loved him here, too bad he chose to leave: he missed a great opportunity to forge an extraordinary career at Milan.”