The AC Milan Women lost the Coppa Italia final via the lottery of penalties as both teams were unable to find a deadlock after 120-minutes of play.

In the end, the match went to penalties, and Milan failed to convert two out of three spot-kicks. Roma managed to convert three of theirs and went on to lift the trophy. A breakdown of how Milan lost the Coppa Italia final is below…

Milan fielded their usual 3-5-2 formation which transitioned to a 5-3-2 while defending. Coach Ganz made the conscientious decision to play Giacinti and Dowie upfront as the latter was selected for her more physical presence in attack.

Ganz had the midfield play narrowly by packing players in the middle and having them press their opponents up the pitch. Milan’s defense started the match with a defensive line that was 30-40 metres from their goal, as they used high-intensity pressing to prevent Roma from building play. Bergamaschi and Tucceri Cimini were tasked with neutralising Roma’s wingers, while the midfield trio of Vero, Jane, and Hasegawa tried to press high to prevent the Giallorosse from engaging in positional play.

The pressing then led to the Rossonere’s first chance of the game, after Jane’s interception in the midfield, pass to Giacinti, and the captain’s through ball found Dowie in the box. The striker was then in a one-on-one position vs Roma’s Camelia Ceasar, but her was not able to convert her chance. 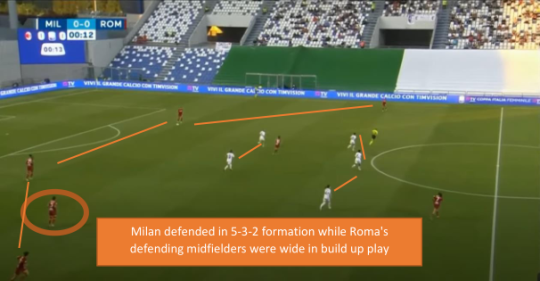 Roma took the field in a 4-2-3-1 formation. The Giallorosse had a more quick and agile team that was fortified with muscle in the form of defenders Allyson Swaby and Elena Linari. Roma’s game plan revolved around them having more possession, and they took the pitch with players who could help them maintain.

Their starting line-up consisted of players that have a low center of gravity and who are fast, and they also chose players who had good positional movement on and off the ball. The Giallorosse’s game plan was to stretch the pitch wide through the use of their fullbacks, Elisa Bartoli and Angelica Soffia. They were also looking to exploit a 2-on-1 situation against Milan’s full-backs.

The Rossonere managed to avert this by defending aggressively and reading the game well, as they anticipated Roma’s movements ahead of time. No one was excelled at this more than Verónica Boquete. The midfielder had a fantastic match, as she intercepted many balls, and started almost every Milan attack, and showed an impressive range of passing and skills.

Nearly all of Milan’s chances in the first half came through her. Whether it was by her intercepting the ball from Roma players and launching a counter-attack or using her creativity to carve out chances for the attackers.

Vero’s actions created at least four goal-scoring opportunities within the first 29 minutes but Giacinti and Dowie couldn’t find the back of the net. Milan played more pragmatic football, with long balls and direct passing, as they were looking to find the quickest way possible to the opponent’s goal.

Part of the reason why was that midfielder Yui Hasegawa didn’t feel like her old self during this match. She was pretty quiet in the first half with only one attempt at goal coming from a free-kick. Her free-kicks also went wayward, as did her shots on goal. Perhaps it was the nerves of a final getting to her but she did not feel like her old self.

The long balls from Korenčiová and the defensive line seemed to not get the best out of Hasegawa as they partially prevented her from maintaining the ball for long periods. Roma, on the other hand, struggled in the middle and the final third.

It was difficult for them to find any space due to the fact Milan had more players in the middle and in front of Korenčiová (e.g. Agard, Vitale, and Fusetti vs Alves and Lazaro). Therefore, the only way Roma could attack was with more numbers was on the flanks. The Giallorosse were not able to execute their game plan as Bergamaschi and Tucceri Cimini controlled both Roma’s wingers and Roma fullbacks in tandem with their midfield. They also made very few mistakes while doing this. 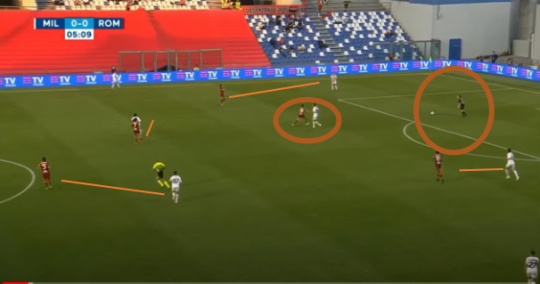 Roma also defended well, as they pressed up high and used player-to-player marking in an attempt to prevent Milan from building up play from the back. However, unlike their opponents, Milan took little risks in their build-up play, so the Giallorosse did not have to do much work in that regard. The Rossonere opted to send long balls to their forwards in an attempt to avoid Roma’s pressing and to make transitions towards the opposition half.

Milan had the numerical advantage in both the defence and midfield, and they could have used an extra player as they attempted to move up the pitch with the ball. Despite this, Vero and Giancinti managed to shine through as they found spaces to receive the ball, link with their teammates, and force Roma to push back. 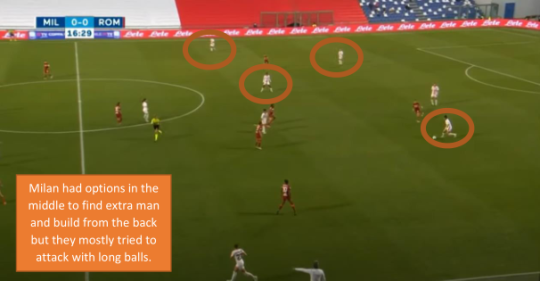 In contrast, Roma’s attackers weren’t so lucky. For example, Paloma Lázaro barely touched the ball in the first half, as she only one attempt on goal in the 15th minute. She was neutralised by Milan’s trio of defenders and didn’t have any help from teammates to break their stronghold.

Roma also had more possession than their opponents, but they did so without being clinical in the final third. This was part of Milan’s game plan, as they knew the Giallorosse wouldn’t do much with the ball if they had it. The Rossonere would, in turn, hit them on the counterattack. Milan outshot the Giallorosse by a ratio of 17 to 12. 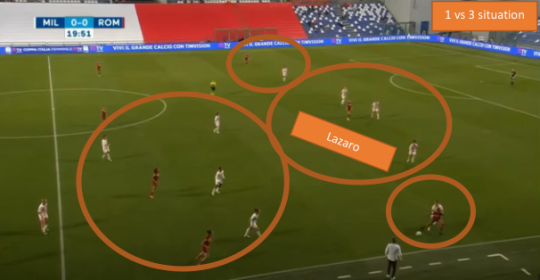 As was illustrated in the image above, it was pretty apparent that Roma would not be able to find spaces and threaten Milan’s goal with their tactics. They didn’t take very many risks, and they were also outnumbered in the final third.

The Giallorosse were also hoping that their two fullbacks, Soffia and Bartoli, would overrun the flanks were Soffia and Bartoli and create space on the wings. However, they had trouble connecting with their attackers and finding the space needed to create chances. At times, Soffia did try to drift into the middle, while Bartoli worked in tandem with Serturini to gang up on Bergamaschi. They were not successful in their endeavours, however.

In the second half of the game, both teams began to raise the tempo and executed a more ‘run-and-gun’ style of play. Both sides tried to play more direct football, with less possession and more vertical balls. The two teams were both intent on breaking the deadlock and winning the Coppa Italia. Roma was quicker in transition, demonstrated by the ease in how switched from left to right and vice versa.

Midfielders Giugliano and Bernauer were the catalysts for this, as they tried to switch play with long balls that found their wingers. As a result, Serturini and Thomas were given more space as Milan’s midfield started to have more problems in covering up the pitch. 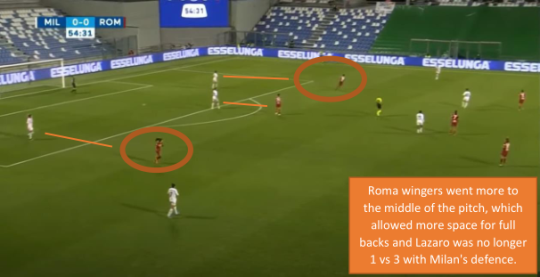 They also began to create better movement in the midfield, which forced centre-backs Francesca Vitale and Laura Fusetti to do more work. In a reversal of the first half, Roma had the numerical advantage as they began to outnumber Milan in the middle. The two defenders had to work hard to contain the Giallorosse as they began to move the ball faster and with more precision.

Fortunately for Milan, Hasegawa started to play like her old self again. She started to have more of the ball and created a few chances for Giacinti, and for Dowie as well. The striker had a great chance to put Milan ahead at 67th minute but chose to fluff her lines and overdribble the ball. She also began to press less intently, which was perhaps a sign of fatigue. With this in mind, it was understandable that Ganz will take her off the pitch.

Ganz then decided to replace Dowie with Grimshaw and switch to a 5-4-1 while defending. Grimshaw had fresh legs and could cover more of the pitch, unlike Dowie. This was needed, as both Serturini and Bartoli had started to play better and cause the Rossonere problems on the left.

The constant running began to wear the players down and Refiloe Jane had to be replaced by Claudia Mauri in the 90th minute. Around three minutes later, Mauri would receive a yellow card for fouling a Roma player. She was also fortunate to stay on the pitch after that, as she technically should have been sent off for a denial of a goalscoring opportunity just a few minutes later. 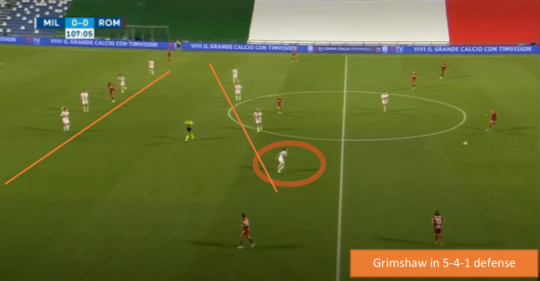 Going back to Grimshaw, her defensive work was, unfortunately, ornamented by a mistake, as she accidentally blocked Vero’s shot in front of goal in the 77th minute. The midfielder would atone for this by creating one of the best chances of the game. During the first few minutes of extra time, Grimshaw collected the ball then passed it to Mauri. Mauri then decided to pass to Giacinti, but Swaby blocked the shot after she read the play well. 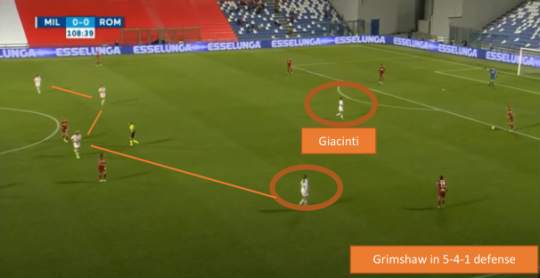 The Giallorosse also disrupted Milan’s rhythm by constantly fouling them. In particular, Vanessa Bernauer committed two fouls on Vero, and Vero complained to the ref about them. Bernauer was not carded, despite how cynical the fouls were. Milan were also the beneficiary of the referees’ faux pas, as was noted above. Between this and the lineswomen killing off Milan’s momentum by precipitously raising their offside flags, it’s safe to say that the officiating during this match had a lot to be desired.

Roma would not fade quietly into the night as they also had their chances to win the game, with the two most prominent opportunities coming from Vanessa Bernauer. After 120 minutes, the game went to penalties.

In the end, nerves and tiredness got the best of Milan, and they missed all but one of their penalty shots. Roma would go on to lift the trophy, while Milan were left with a sense of regret and wondering what could have been.

This was a tough loss to take. There were a variety of factors behind the loss and each of them should be thoroughly examined. One area of focus should be on Ganz’s reluctance to use substitutions. The coach has a lot of quality players on the bench and is reluctant to use them. Instead, he relies on the same core of players over and over again.

As a result, it not only erodes trust between him and his bench, as it can be detrimental to their self-esteem when they’re not given the necessary minutes they need to thrive. Not using your subs can lead to fatigue and injury. The fact that Milan were so burned out when it came time to take penalty kicks confirms this.

Though losing the Coppa Italia was, no doubt, disappointing, the Rossonere could learn a few lessons from this loss. The two main talking points to take away from the match is to sign technically gifted and fast players to the team.

The second is that the coach needs to learn to trust his bench and to rotate their players so that they will not be subject to injury and fatigue. Perhaps he needs to be given the right players to do so. If that’s the case, then Milan needs to bring in players of a higher caliber, including those who can make a difference when they come off the bench.

The Rossonere can also hold their heads up high knowing that they achieved their seasonal goal, which was qualifying for the Champions League. There will also be plenty of chances for them to win silverware in the future, as brighter days and better moments are in store for them.