AC Milan head into the final game of their Champions League group stage campaign knowing that beating Liverpool at San Siro gives them a chance of qualifying for the knockout stages.

The Rossoneri must first beat Liverpool and then wait for good news from Portugal where the match between Porto and Atletico Madrid will take place. If it is a draw or if Atletico win by the same margin as the Rossoneri (or a lesser margin), then there will be wonderful scenes at San Siro.

Stefano Pioli insisted in his pre-match press conference that the ‘smallest details’ have been covered in preparation, but acknowledged that a near perfect game will be needed to get the win.

We are beginning to wonder if Milan will ever have a fully fit squad against as two new injuries mean the forward depth has been even further depleted, with Rafael Leao and Pietro Pellegri sustaining muscle problems that will keep them out.

In addition to the Portuguese winger and the Italian striker, Pioli will also be without Olivier Giroud, Samu Castillejo and Ante Rebic and Davide Calabria who are stuck in the treatment room.

According to MilanNews, the Rossoneri are currently likely to take to the field tomorrow with Mike Maignan in goal, Pierre Kalulu (favoured over Florenzi) at right-back, Fikayo Tomori and Alessio Romagnoli as the centre-backs and Theo Hernandez at left-back despite the fact the latter missed training today with a cold. 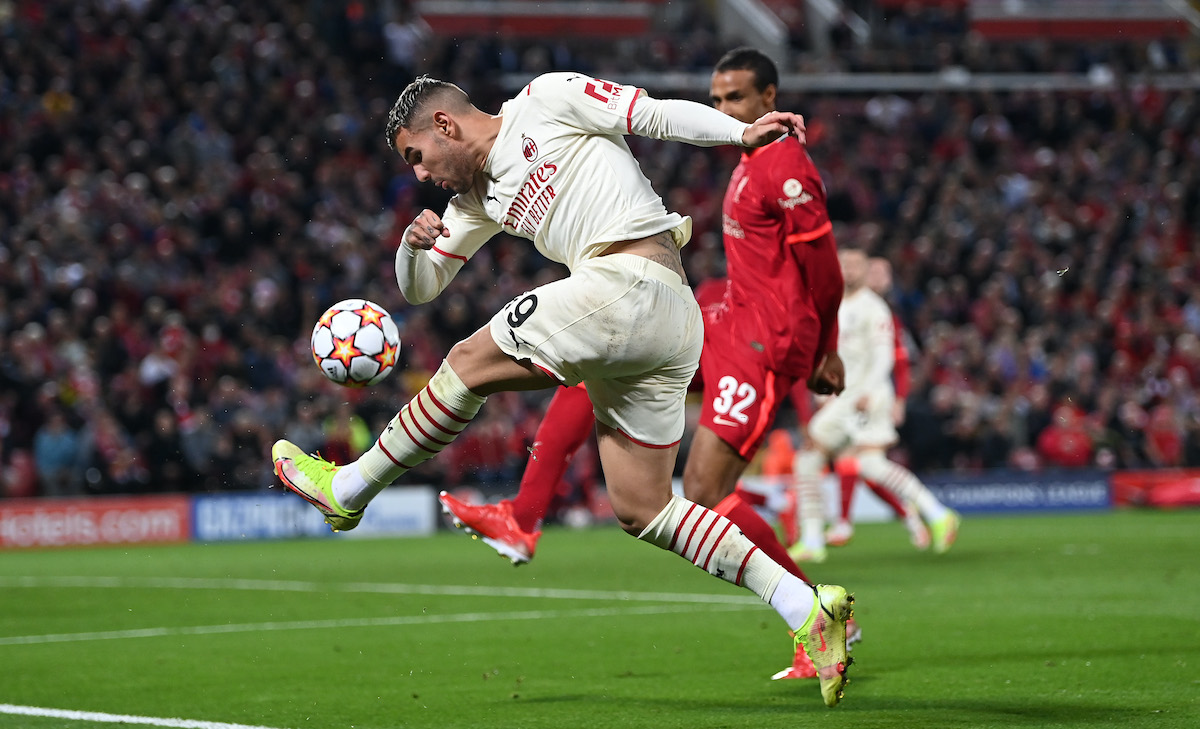 The double pivot should be Sandro Tonali and Franck Kessie with Tiemoue Bakayoko therefore dropping to the bench. The centre-forward will be Zlatan Ibrahimovic, and behind him Brahim Diaz and Rade Krunic are sure of a starting spot in the trident, while Junior Messias and Alexis Saelemaekers are battling for the last place.

There are two things that may give Milan a bit of extra hope heading into this game against one of the pre-tournament favourites. The first is that Liverpool are right in the heart of a battle for the title as they have won 10 of their opening 15 Premier League games, currently one point behind Manchester City at the summit.

The second factor is that the Reds are already through to the last 16 and have been since the end of matchday four in the group stages, while top spot is also secured, with Jurgen Klopp admitting that rotation will be the order of the day or the medical team will ‘smash’ him.

The website This Is Anfield have predicted Liverpool’s team for the game at the Giuseppe Meazza, noting that Harvey Elliott (ankle), Curtis Jones (eye), James Milner (suspended) and Roberto Firmino (thigh) will all miss the game.

They believe the defence should see Alisson behind a back four of Neco Williams, Ibrahima Konate, Joel Matip and Kostas Tsimikas which means Virgil van Dijk would be rested, while a midfield trio of Fabinho, Tyler Morton and Alex Oxlade-Chamberlain is ‘the likeliest three-man unit’.

Mohamed Salah should still get a nod and Divock Origi is also very likely to start given his late winner against Wolves at the weekend, while Takumi Minamino completes the attack and the eleven.

The two sides have met three in this competition before, and fans will need little reminder about the two biggest occasions as they were both finals.

Liverpool were celebrating after the first time the sides met following a stunning comeback in the 2005 Champions League final in Istanbul, during which Rafa Benitez’s side came from 3-0 down to force penalties and then they subsequently won the shootout.

However, Milan would get their revenge two years later that night in Athens. The Rossoneri – then managed by Carlo Ancelotti – emerged 2-1 victors in the rematch in Greece to move onto seven Champions League titles.

Earlier this season another thriller was played out but this time not a final and this time at Anfield. Alexander-Arnold gave the hosts the lead but Pioli’s men scored twice in quick succession through Rebic and Brahim Diaz to be 2-1 up at the break. Nonetheless, Liverpool fought back, scoring through Salah and Henderson to win 3-2.

➤ This will be the fourth meeting between Milan and Liverpool, with all four coming in the Champions League. Both teams have won one game apiece in the previous three, while their draw came in the 2005 final which Liverpool went onto win on penalties.

➤ The previous three meetings between Milan and Liverpool have seen a total of 14 goals scored (including extra time), with both sides scoring seven each. The Reds won 3-2 in this season’s reverse fixture at Anfield back in September.

➤ Milan will be looking for their first victory against an English side in European competition since February 2012, when they won 4-0 against Arsenal in the Champions League Round of 16. The Rossoneri are winless in their last six clashes with English opposition, losing five of those games (D1).

➤ English teams have won five of their last six away games against Milan in European competition (L1), with Arsenal in February 2012 the only team to fail to win in this run. All six of these games have taken place in the Round of 16 between the Champions League and the Europa League.

➤ Milan have only won one of their last nine home games in the group stage of the Champions League (D5 L3), with that being a 2-0 victory over Celtic in September 2013. The Rossoneri are winless in their last four in the group stage in the competition on home soil, although three of those have ended level (L1).

➤ Liverpool’s Mohamed Salah has scored six goals in five Champions League appearances in 2021-22, with their 2-0 win over Atlético Madrid being the only game he has failed to score in this term. The Egyptian has only netted more in a single Champions League campaign once in his career (10 in 2017-18).

➤ No AC Milan player has been directly involved in more shots than Theo Hernández in the Champions League this season (9 – three shots, six chances created). The Frenchman has also made 50 progressive carries in the competition this term (moving the ball 5+ metres upfield), more than any other Milan player.

It goes without saying that Zlatan Ibrahimovic is expected to be the leader for Milan tomorrow in what will be his first start in the competition this season after Rebic or Giroud led the line from minute one in all the previous games. He knows Liverpool well and will be desperate to net his first Champions League game for a few years.

The area where this game could very well be won and lost though is in midfield, where the Diavolo were overrun for most of the game at Anfield. Kessie-Tonali is the best double pivot at the moment and they will have to dominate Morton and Oxlade-Chamberlain to create the space for Brahim Diaz and the interchanging forwards to cause Fabinho a headache.

For the away side Mo Salah will be looking to add to his 31 goals for Liverpool already in the Champions League. He has 6 in 5 games already in the current group stages. Then there will of course be a battle between Ibrahimovic, Matip and Konate if those are the two centre-backs, which should be a fascinating pair of duels.

We would love to predict a fairy tale night at San Siro and while the ingredients are there for this to be a really memorable moment in the club’s recent history, Liverpool will still put out a very talented side full of players looking to prove a point and primed for exploiting Milan on the break.

Add to that the ingredient that the scoreline from Porto might dampen the spirits of the fans a bit and we will conservatively predict the European journey ends here.