AC Milan will be looking to continue their excellent start to the season at San Siro on Saturday night when they host Hellas Verona.

Milan will be looking to continue their fantastic league form from before the international break, with their most recent result a 3-2 win away against Atalanta and a performance that was more convincing than the scoreline suggests after a fast start established a 3-0 lead before a late fightback.

Stefano Pioli revealed in his pre-match press conference that he is expecting a difficult game against a resurgent Hellas Verona side, and he has an injury crisis to battle too.

In his pre-match press conference Pioli also revealed that Brahim Diaz is suffering with illness, and the latest from Sky (via MilanNews) revealed that the Spaniard is unlikely to be fit enough to start.

This morning in training at Milanello the Milan head coach tried Daniel Maldini in the attack with Ante Rebic and Alexis Saelemaekers on the wings and Olivier Giroud up front.

In midfield it is expected that the double pivot will be Sandro Tonali and Franck Kessie while in defence there will be new chances for Fode Ballo-Tourè, Alessio Romagnoli, Fikayo Tomori and Davide Calabria in front of Ciprian Tatarusanu. The decisive training session however will be tomorrow.

It has certainly not been an uneventful start to the season for Verona, who hired Eusebio Di Francesco to replace Ivan Juric but decided to part ways with him after only three games and three losses in the league.

Igor Tudor was brought in to replace him and the Gialloblu have had an upturn in fortunes, having climbed from 19th after three games to 12th now after a run of two wins and two draws, including a victory against Roma.

Scoring goals has not been a problem for Verona as they have netted 15 times this season – comfortably the most of the mid-table sides and as many as Milan – but letting them in has been an issue with 14 conceded.

Tudor has a couple of key injury concerns to contend with as wing-back Davide Faraoni (knee) and Ivan Ilic (ribs) are both at risk. They were injured during a recent win over Spezia and are doubts for the game at San Siro. The pair suffered knocks during the victory against Spezia and are being closely monitored in the build-up to the match.

Gianluca Frabotta is also set to miss out, but Tudor can pick between Giovanni Simeone, Nikola Kalinic and Kevin Lasagna to start up front in a 3-4-2-1 system.

Milan have typically had the better of Verona in this fixture in recent years, having won nine of the previous 19 meetings between the two sides, while there have been seven draws in that run and three wins for the Scaligeri.

The Rossoneri took four points from Verona last season but were left to battle back from a 2-0 deficit in the home game to rescue a late draw through Zlatan Ibrahimovic’s header, while in the return fixture a Rade Krunic free-kick and a Diogo Dalot goal on the break sealed a 2-0 win.

Milan have actually only won one of their last five league home games against Verona, with a pair of 2-2 draws and a pair of 1-1 draws in there.

➤ Having lost two successive league matches against Verona between 2016 and 2017, Milan have gone unbeaten in the following five against them (W3 D2).

➤ Milan are undefeated in 29 Serie A home meetings with Verona (W16, D13): only against Inter and Juventus have the Gialloblu played more top-flight away matches without a single win in the competition (30 against each).

➤ Milan have won all three of their home games so far this season: they last won their first four home matches in a Serie A season in 2005-06.

➤ Following three successive defeats under Eusebio Di Francesco, Verona have won two and drawn two of their four Serie A matches under Igor Tudor, netting 2+ goals in each game (12 in total) – under the Croatian, Verona are averaging their highest points per game ratio in the three points for a win era (2.0 – higher than under any other manager).

➤ Verona have failed to win each of their last seven Serie A away matches (D3 L4), drawing their last two: they last drew three such matches in a row in February 2020 (one of them against Milan).

➤ No side has scored more goals from outside the box than Verona in Serie A this season (three), whilst AC Milan haven’t conceded any such goals in the competition this campaign.

➤ Besides being the side to have scored the most goals in the opening 15 minutes of play in Serie A this season (five), Verona are one of the three teams (alongside Juventus and Fiorentina) that are yet to concede a goal during this period.

➤ Milan’s Rafael Leão has scored three league goals this season, whilst in his first seven seasonal matches in the last two campaigns he had scored one in 2019-20 and two in 2020-21 – among Serie A players with at least 15 goals scored since the start of 2019-20, only Dusan Vlahovic has done so at a younger age than the Portuguese.

➤ Kevin Lasagna scored his very first Serie A goal at the Giuseppe Meazza (January 2016), against Inter: the Verona striker has scored three league goals against Milan, only against Benevento (four) has he scored more in the competition.

Given the injury problems that Milan are battling, the ones to watch become the players that will have to step up and try to fill the void left through absences. An eye will be on the full-backs Ballo-Toure and Kalulu to see how they deal with Barak and Caprari, for example.

Then, Daniel Maldini is worth paying close attention to if indeed he does get his second Serie A start, though the big names like Giroud and Rebic will be the ones who have to carry the team through what could be a battle of a game, as must the double pivot of Kessie and Tonali. 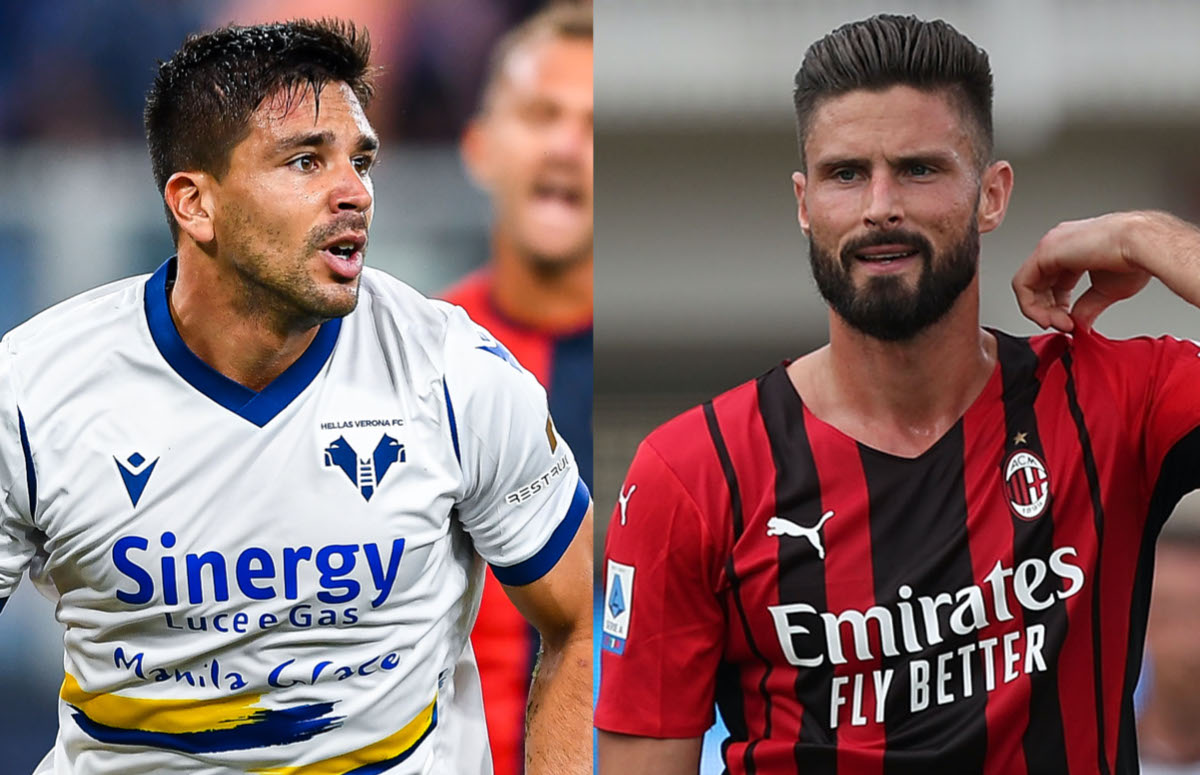 Caprari is the main threat for the away side as he has 2 goals and 2 assists to his name already in the league this season, while Kalinic has netted 3 times and would love a goal against his former club, but Barak seems to be the out and out powerful threat at the moment.

Then, the back three will have a hard job to keep Milan’s attack out given they have leaked on average two goals per game through the first seven rounds of the season.

This could potentially be a very tough game and one Milan drop points in against a team riding the crest of a wave under their new manager, but even with injuries the Diavolo must look to dine out on their own momentum and get an early goal to force Verona’s hand and expose them at the back.