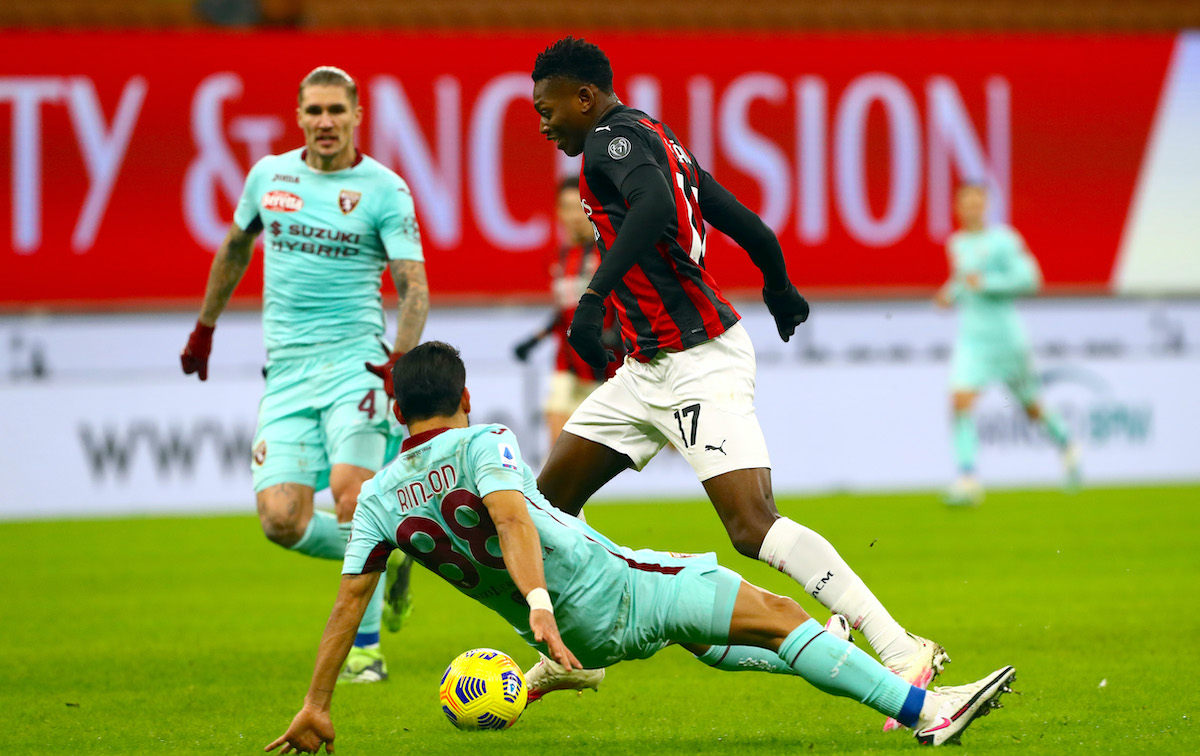 AC Milan will be looking to rack up their ninth Serie A win of the season in their tenth league game as they welcome Torino to San Siro on Tuesday night.

Milan were made to battle for their last two wins as they overturned a two-goal deficit against Hellas Verona in their most recent home fixture to win 3-2 with three second-half goals, and on Saturday they let a two-goal lead slip against ten-man Bologna before recovering to win 4-2 against nine men.

Head coach Stefano Pioli spoke to the media before the game and revealed his expectation that it will be a tough game against the Granata, who have had quite the overhaul in recent months.

Pioli had to battle nine absences during the trip to the Stadio Renato dall’Ara over the weekend starting with goalkeepers Mike Maignan and Alessandro Plizzari, who are both expected to miss another couple of months after undergoing surgery.

Theo Hernandez and Brahim Diaz missed the game as they were positive for Covid-19 but the former is now testing negative. Then, Alessandro Florenzi and Junior Messias were out and should me for a couple more weeks with knee and muscle problems respectively.

Franck Kessiè missed the Bologna game due to flu but return for Torino’s visit, while Ante Rebic’s ankle is still hurting and striker Pietro Pellegri had some inflammation. The Italian striker has recovered, the Croatian has not.

MilanNews are reporting that Ciprian Tatarusanu should be in goal protected by a back four of Davide Calabria, Fikayo Tomori, Alessio Romagnoli and Fode Ballo-Toure from right to left with Simon Kjaer getting a rest. In midfield Kessie is ready to return to the starting eleven and should be partnered by Sandro Tonali in the double pivot.

In the attack Alexis Saelemaekers should recover his spot in the line-up from the injured Samu Castillejo, with Rade Krunic and Rafael Leao completing the trident behind the centre-forward Olivier Giroud.

Torino decided to go in a new direction as Davide Nicola left at the end of last season having guided Il Toro to safety, and they poached Hellas Verona manager Ivan Juric who has given the club a more steady start to the season.

They have however been streaky during the first nine games, losing their first two then winning their next two after that while keeping clean sheets. A four-game winless run that included one-goal defeats to Juventus and Napoli followed, but the weekend brought a much-needed 3-2 win over Genoa that puts them currently in 12th.

In terms of selection problems for Juric to contend with, he will be without midfielder Rolando Mandragora for a while after he underwent knee surgery and full-back Cristian Ansaldi sustained a thigh injury in the win over Genoa.

The main speculation is surrounding whether Andrea Belotti may get the nod to lead the line having played 30 minutes against the Grifone and with all the rumours swirling surrounding a potential move to his boyhood club Milan next summer. If not, Sanabria will likely lead the attack.

This is one of the more historic fixtures in Serie A as there have been 150 games between Milan and Torino in the over 120-year history of both clubs with 62 wins for the Rossoneri and 33 for the Granata, plus 55 draws.

Last season not only saw Milan do the league double over their Piedmont opponents, but they did so without conceding as well. It was back on January 9 of this year that Rafael Leao and a Kessie penalty gave the Rossoneri a 2-0 win.

Towards the back end of the season came the real memorable recent fixture though as Milan won 7-0 at the Stadio Olimpico Grande Torino. Theo Hernandez’s brace, another Kessie penalty, a Brahim Diaz goal and a 12-minute hat-trick from Ante Rebic completed a real rout.

➤ Milan have won each of their last three Serie A matches against Torino by an aggregate score of 10-0: only once have the Rossoneri won more games in a row against the Granata in the competition (five in the early 1950s).

➤ Milan have kept a clean sheet in 52% of their Serie A home games against Torino (39/75), including each of the last four: the last Granata league goal on the road against the Rossoneri was back in August 2016, from Daniele Baselli.

➤ Milan have won their last five league games: only once under Stefano Pioli have the Rossoneri registered six consecutive Serie A wins, between July and October 2020.

➤ Milan have won each of their last four homes games in Serie A: Stefano Pioli could become the first Rossoneri manager to win five consecutive home games in the competition since Clarence Seedorf in 2014.

➤ Torino netted three goals in their last match against Genoa, the last time they scored 2+ goals in consecutive league games was back in November 2020.

➤ Torino lost 0-1 in their last league match on the road, against Napoli: the Granata could remain goalless in two consecutive Serie A away matches for the first time since February 2020, where they failed to score against Lecce and Milan.

➤ Should he score, Olivier Giroud would become only the second player to score in each his first three Serie A home appearances for Milan in the three points for a win era, after Mario Balotelli in 2013.

➤ Should he score in this match, Zlatan Ibrahimovic will reach two milestones: 150 goals in Serie A and 400 goals in domestic leagues in his career – after scoring in his first three league matches against Torino, the Swedish striker hasn’t found the net in his last three matches against the Granata.

➤ Andrea Belotti has scored five goals at the San Siro stadium in Serie A, although four of these have been against Inter – the Torino forward has scored only one league goal in seven away games played against the Rossoneri: in August 2016, when he also missed a 96th minute penalty.

While Milan are still missing some key pieces from their ‘first choice’ starting line-up, the scrutiny will remain on a trio of players who have not exactly offered guarantees in the absence of Maignan, Theo and Brahim Diaz.

A more convincing and commanding display from Ciprian Tatarusanu will be needed as he simply hasn’t bossed his area like Maignan does, while Fode Ballo-Toure has another chance to put right a shaky start at left-back and Rade Krunic must show a bit more in terms of ability to link the midfield and the attack.

In terms of attacking threat, it will be up to Leao and Giroud to try and produce the firepower needed to guide Milan to a ninth win of the season. Aiming to stop them will be 24-year-old centre-back Bremer who has been Torino’s best defender since his arrival from Brazil in 2018 and earlier today he was linked with the Rossoneri.

Bremer actually has the highest average WhoScored rating of any player from the two sides so far this season and is a big part of the reason Torino have only conceded 10 goals so far – the least of any team outside of the top four.

The attacking deficiencies mean they have scored just 12, but Sanabria, Brekalo and Pjaca each have two goals while full-back Singo has two assists.

The real tonic to the recent defensive troubles would be a clean sheet, and keeping it tight at the back would certainly give the forwards a boost at the other end, because needing to score three to win every game is not sustainable.