AC Milan will be looking to keep their positive recent run going on Saturday night when they face bottom-placed club Salernitana away from home.

The Rossoneri have been great form so far in February, opening the month with a 2-1 derby comeback win against Inter to reopen the title race, then reaching the cup semi-finals with a 4-0 hammering of Lazio, and moving top with a 1-0 win over Sampdoria last Sunday to take advantage of Napoli’s 1-1 draw with Inter.

It is certainly the right kind of form to tackle a potential banana skin such as Salernitana, whose on-field struggles this season have only been distracted from because of the off-field chaos including attempts to sell the club before they are automatically demoted.

Pioli spoke to the media ahead of the trip south at his pre-match press conference and insisted that their recent changes makes them a more unpredictable opponent than some might think.

The injury absentees remain the same for the Rossoneri compared to when they faced Sampdoria at the weekend, with Zlatan Ibrahimovic still battling Achilles discomfort, Marko Lazetic undergoing a personal conditioning programme and Matteo Gabbia out with plantar fasciitis. However, Theo Hernandez does return from suspension.

According to this morning’s edition of La Gazzetta dello Sport, Mike Maignan will be in goal protected by a back four of Davide Calabria, Fikayo Tomori, Alessio Romagnoli and Theo from right to left.

Sandro Tonali should get the nod alongside Franck Kessie in the double pivot, with the Ivorian favoured to get the nod at the present moment over Ismael Bennacer.

Alexis Saelemaekers is tipped start on the right side of the attack over Junior Messias, with Brahim Diaz the playmaker and Rafael Leao as the left winger completing the trident behind the centre-forward Olivier Giroud. 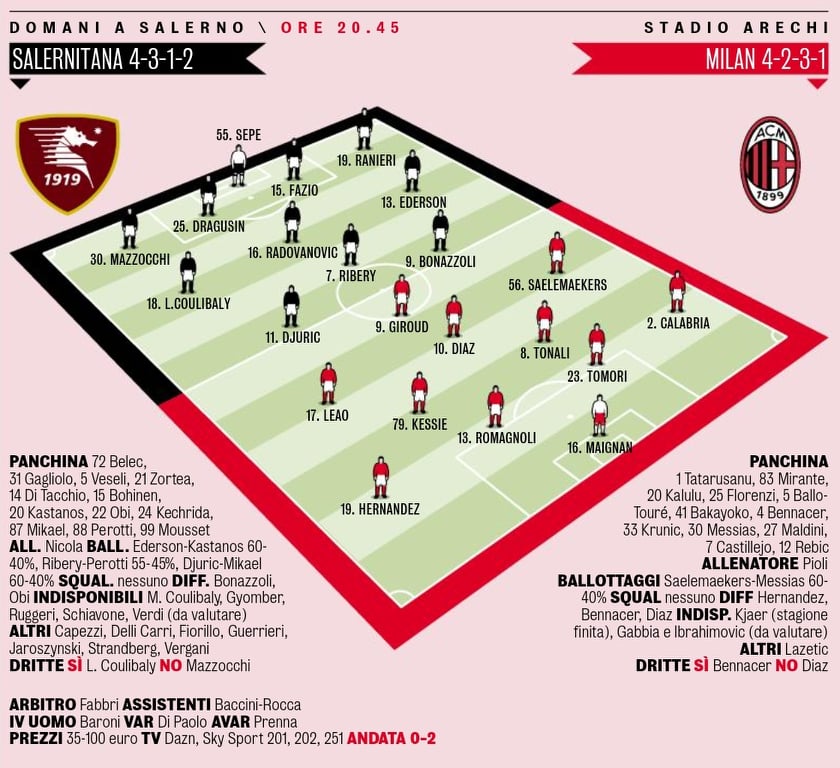 Salernitana secured a somewhat unlikely return to the top flight when they were promoted from Serie B last season, but they have been in the relegation zone since the second round of the campaign and are now rooted to the bottom of the table, with 3 wins, 4 draws and 16 losses, plus a -36 goal difference.

They had Fabrizio Castori as head coach for the first eight games of the season, the man who brought them back up to Serie A after a 22-year absence, and he went viral after a picture of him looking decimated following his sacking emerged.

This is an image of sacked Salernitana coach Fabrizio Castori. The man who brought them up to Serie A after 22 years was getting to grips with losing his job, his club. Sitting alone on the Vietri sul Mare seafront.
The human cost. No one will forget the tremendous job he did. 💕 pic.twitter.com/3pdxvbhdLF

They then hired Stefano Colantuono who lasted until the recent draw against Genoa – their second in a row in the league – and now former Genoa and Torino manager Davide Nicola will take on Milan as his first opponent.

There are plenty of selection problems for him to battle though as Mamadou Coulibaly, Matteo Ruggeri and Andrea Schiavone are all out, with Gyomber and former Milan man Simone Verdi expected to miss the came.

Diego Perotti will look to start with Milan Djuric up front depending on if Federico Bonazzoli passes a late fitness test, while Franck Ribery is expected to come off the bench and he has a history of scoring against Milan.

Salernitana have only won one of their five Serie A matches against Milan in their history and have lost the other four, with their success being a 4-3 win against the Rossoneri all the way back in June 1948.

The meeting between the two sides earlier in the season ended in a routine home win at San Siro as Franck Kessie and Alexis Saelemaekers each netted in the first half, though the margin of victory should have been wider.

➤ Milan have scored at least two goals in each of their five matches against Salernitana in Serie A (12 goals scored, averaging 2.4 per match), the highest that the Rossoneri have recorded against a single opponent currently in the competition.

➤ Only four of Salernitana’s 13 points in Serie A this season have come against opponents currently in the top half of the table, while Milan have gained 31 points against sides in the lower half – only Napoli (34) have done better than the Rossoneri so far.

➤ Each of the last nine matches between the first and the last team in the table at the start of the matchday ended with a win for the top of the table, the last time that did not happen was in May 2016 (Hellas Verona 2-1 Juventus).

➤ Salernitana have picked up five points in their five Serie A games in 2022 (W1 D2 L2), an average of one per game, more than double the average of 0.4 they recorded in their first 18 games in the current league.

➤ Milan have won 33 of their 46 Serie A away games under Stefano Pioli, more than any other team in the big five European leagues since he became Rossoneri manager on 9 October 2019.

➤ Salernitana have scored the joint-most goals (level with Fiorentina) from outside the box in 2022 in Serie A (3), each of those from direct free kicks.

➤ Salernitana have the lowest possession (38%) in Serie A this season, while Milan have won seven of their nine games in which they have had 56% or more of possession.

➤ Franck Ribéry scored his last Serie A goal against Milan in March 2021: since then, he has played 22 games in a row failing to score, only once in the big five European Leagues he registered a longer such streak (24 games between July 2020 and January 2021 with Fiorentina).

➤ Rafael Leão has been directly involved in five of Milan’s last eight Serie A goals (three goals, two assists), however, the Rossoneri striker has failed to score in each of his last six league games against newly promoted opponents, with his last goal against these teams coming in January 2021 against Benevento.

➤ Milan striker Olivier Giroud has scored seven Serie A goals in only nine starts and could score away from the San Siro in the current league for the first time since 15 February 2021, against Newcastle, at Stamford Bridge for Chelsea.

Bonazzoli is undoubtedly the one to watch from the home side as he has amassed 5 league goals this season on loan from Sampdoria, while Djuric and Verdi are the players behind him on 2. Ribery leads the way with 2 assists.

However, the feeling is that if Salernitana are to get a result from this game it will be the Serie A veteran Fazio – who joined from Roma – and the defensive midfielder Radovanovic who will play a key tactical role.

For Milan the in-form men are Leao and Giroud given the former scored the winner at the weekend and is in double figures for goals this season while the latter scored braces against Inter and Lazio, but wants to get off the mark away from home.

The reception Kessie gets and the reaction he provides on the field amid the turbulence surrounding his future will be interesting to watch, as will the performance of whoever starts on the right wing.

If Milan are serious about fighting for the Scudetto until the end, they have to win a game like this. Salernitana are likely to be a tougher proposition than most are giving them hope of being given the new manager impact and the fact they are unbeaten in two, but the Rossoneri should have too much.