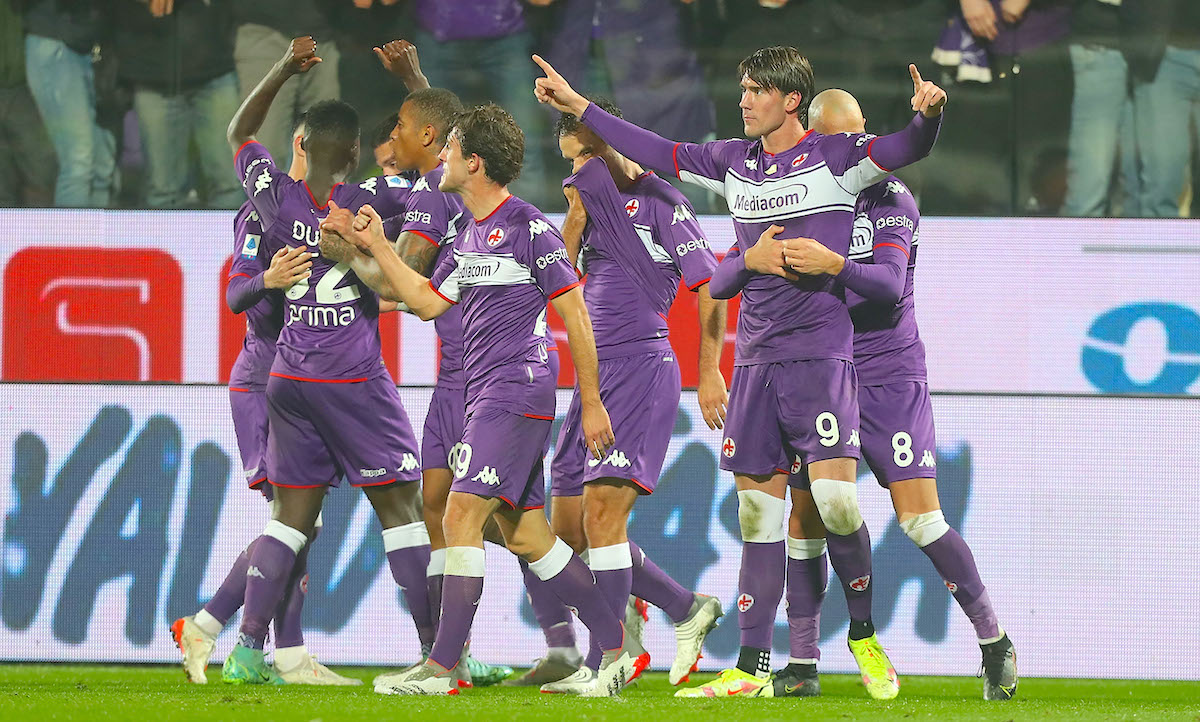 It was a night to forget for AC Milan on the road as they were beaten 4-2 by Fiorentina at the Stadio Artemio Franchi on Saturday night.

Milan had a chance to put pressure on Napoli by getting a win in Florence against a makeshift Viola back line but they were ultimately left to question their own defensive efforts. The first goal came in the first half as Alfred Duncan capitalised on an error from Ciprian Tatarusanu, and Riccardo Saponara’s curling shot doubled the lead before the break.

Dusan Vlahovic scored to make it 3-0 and that looked like it might be game over, yet Zlatan Ibrahimovic gave the Rossoneri a new lease of life by scoring twice in six minutes to make it a one-goal game. An error from Theo Hernandez allowed the Serbia international to score a late fourth goal and condemn the Diavolo to their first defeat of the season, with a late own-goal a mere consolation.

Head coach Stefano Pioli made four changes from the draw against Inter before the international break as Matteo Gabbia came in for the injured Fikayo Tomori with Alessio Romagnoli rested, Pierre Kalulu started in place of the injured Davide Calabria, Theo Hernandez returned after suspension and Alexis Saelemaekers took his spot on the right wing back.

Milan started as the better team and had the ball in the back of the net inside five minutes as Zlatan Ibrahimovic fired the ball past Terracciano having been put through on goal, but the offside flag rightly went up after the finish as the Swede was a couple of yards beyond the last defender.

The Rossoneri continued to be direct in their approach play and Rafael Leao could have perhaps done better when he brought down a ball over the top and dribbled into the box, only managing to stab an effort wide under pressure in the end.

Fiorentina grew into the game after that and began to cause some danger of their own, culminating in a spell of three corners that saw them take the lead through the final one. It was a howler from Ciprian Tatarusanu as the Romanian caught the cross and inexplicably dropped it under little pressure, allowed Alfred Duncan to stab home into an empty net from six yards.

La Viola grew even more in confidence after the opening goal, and Vlahovic got on the end of an excellent cross from the right flank but steered a powerful header over the bar with Milan looking rocked.

Milan went about trying to get themselves level and Terracciano was forced into a diving save when Tonali seized possession and let fly from around 20 yards out with a fierce laced effort. Moments later Leao went on a weaving run and fired from a similar area which the Fiorentina keeper tipped over.

Some nice interplay saw Ibrahimovic find Leao with a neat flick as the Portuguese winger looked to dart in behind though he took one touch too many and overdribbled it. Just over a minute later he angled a curling low shot towards the far corner that was deflected narrowly wide.

Leao continued to cause Fiorentina’s makeshift back line problems but could not find any breakthrough, the latest incident of frustration coming as he bundled his way in behind and saw an effort from a narrow angle blocked behind.

Giacomo Bonaventura had a huge chance to net against his former club and double the lead eight minutes before the break as he dragged an effort wide from the edge of the box when it seemed harder to miss the target.

Ibrahimovic’s difficult start to the game continued when he missed a huge opportunity from a few yards out. A wonderfully shaped cross from Kjaer on the right met the head of the 40-year-old who somehow connected well but diverted it wide.

Right on half-time, Fiorentina doubled their advantage and it came through ex-Milan player Riccardo Saponara. After Pioli’s men failed to clear the danger, Vlahovic laid it off to the midfielder who curled a stunning effort into the top corner giving Tatarusanu no chance.

Milan had the first chance of the second half and again Ibrahimovic should have done better after collecting Leao’s knockdown and just failing to wrap his boot around the ball sending it wide of the near post.

Leao was faced with another chance to halve the deficit as Kessie won the ball back high up the pitch and laid it off to the former Lille man who shaped a curling effort just wide of the upright.

A triple change came in the 56th minute as Olivier Giroud, Junior Messias and Alessandro Florenzi all came on for Kalulu, Brahim Diaz and Alexis Saelemaekers.

However, things were to go from bad to worse on the hour mark as Vlahovic made it 3-0. Milan had exposed themselves at the back and the Serb beat Gabbia in a footrace to a ball over the top, rounding Tatarusanu and slotting into the back of the net.

The three-goal lead would last for barely a minute though as Milan’s high press resulted in a slack pass from Bonaventura that Ibrahimovic collected inside the box and set himself before firing into the far corner with a sweetly struck shot.

With 24 minutes left, the Rossoneri got a second goal back and it was thanks to fantastic play from Theo Hernandez down the left side. He darted to the byline and cut a perfect ball back to Ibrahimovic who was on hand to fire home first time from near the penalty spot.

In the closing stages Saponara went down inside the box believing he had been fouled but VAR found that he had kicked Messias’ leg. Ismael Bennacer and Rade Krunic came on as substitutes either side of that incident.

The game was sealed with five minutes to go and it was Vlahovic who doubled his tally for the evening. Theo lost possession on the edge of his own 18 yard box and the substitute Nicolas Gonzalez squared to the 21-year-old, who finished with all the composure of a veteran into the bottom corner and finally seal the win.

The final action of the game saw the score become 4-3 as a header from Ibrahimovic cannoned off the far post, hit Venuti and went in, but it was to all be for nothing.