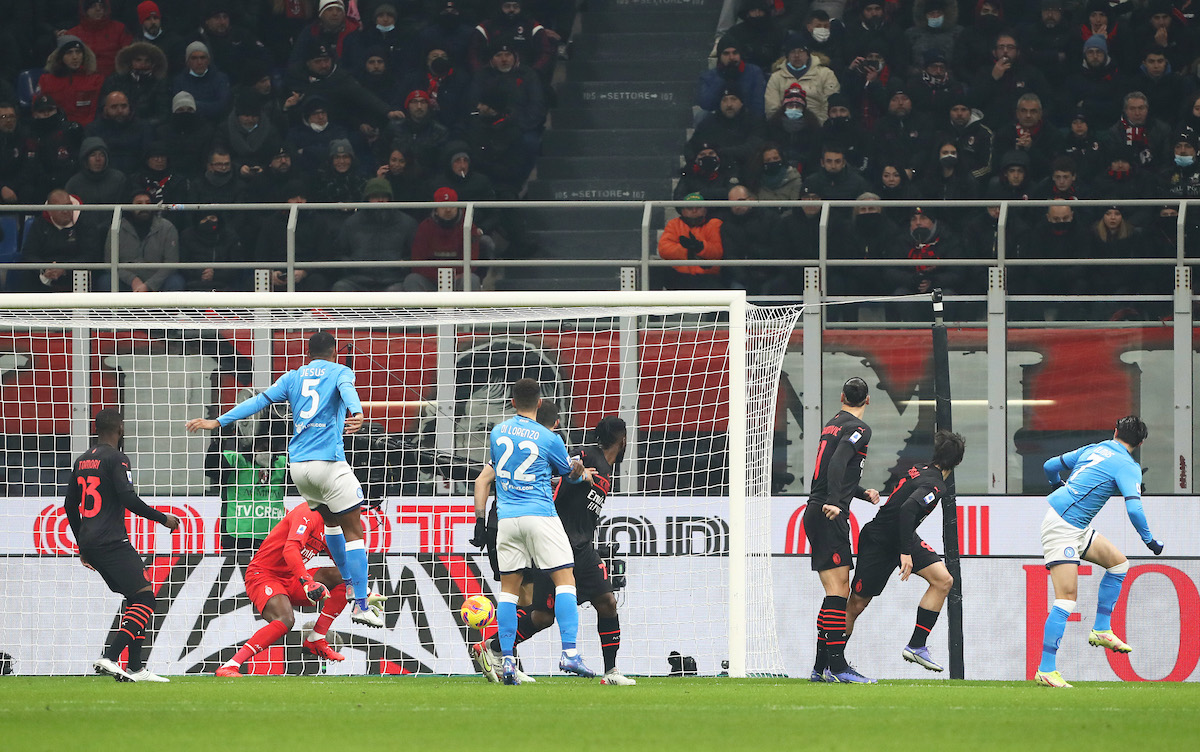 AC Milan’s Scudetto hopes were dealt a huge blow as they were beaten 1-0 by Napoli at San Siro for the second straight season.

In the end it was a header from a corner from Elif Elmas inside five minutes that won the game as head coach Stefano Pioli’s poor record against Luciano Spalletti continued and Napoli jumped above Milan in the table into second place.

Pioli made four changes to his starting line-up compared to the team that drew with Udinese as Fode Ballo-Toure, Franck Kessie, Sandro Tonali and Junior Messias all came into the team at the expense of Theo Hernandez (fever), Ismael Bennacer, Tiemoue Bakayoko and Alexis Saelemaekers.

Napoli started the game as the better side and they got the first goal of the game inside the fifth minute via a set piece. The delivery was whipped in to the near post where Elmas was waiting to head past Maignan having beaten Tonali to the ball.

The best way to describe the opening exchanges after Napoli’s early goal would be tense, as both teams made some niggling challenges that drew the ire of the opposition. The away side again caused a bit of chaos as a corner pinballed around the Milan area, while Ibrahimovic saw shouts for a penalty turned away as he pleaded for a handball.

Ibrahimovic got his first real sniff of goal in the 18th minute as Kessie did well to work the ball out wide to Ballo-Toure whose cross was glances just wide of the far post by the Swede having met it at the near post.

The next effort came from Kessie as the Ivorian wound up for a shot around 25 yards out that he didn’t really get the desired power behind and instead pulled just wide of Ospina’s right post.

Alessandro Florenzi wasn’t far away from grabbing an equaliser in the 34th minute when a set piece was cleared to him a few yards outside the edge of the box and he swung his weaker left foot through the ball but his fierce shot curled just wide with Ospina at full stretch.

There was a moment of confusion inside the box when Rrahmani went to the ground and a low cross struck his arm while he was on the deck with Ibra leading the appeals for a penalty, but a foul was given for a shove.

Ospina was called into action within four minutes of the restart as he made a powerful stop at the near post to palm over a fierce strike from Ibrahimovic that was destined for the roof of the net.

The frantic start to the second half continued as the former Arsenal goalkeeper was again required to make a save from a Messias shot, and at the other end Tomori recovered fantastically to prevent Petagna from getting a shot off having been put in behind amid shouts for an offside call.

After Tomori pushed up the field and won the ball from Zielinski to start a counter attack that ended with another frustrating offside call, a double change came. Alexis Saelemaekers and Olivier Giroud came on for Brahim Diaz and Rade Krunic.

Midway through the second half Messias was not far away from levelling the scores after being fed by Tonali and having dribbled into a shooting position just outside the box, however the Brazilian curled en effort just wide of the upright.

It was very clear that Milan made a switch to a 4-4-2 with the substitutions, and Giroud should have done better from a Messias cross as he got an unchallenged header in, albeit while backpeddling.

With a quarter of an hour left Pioli made another couple of changes as Messias and Tonali were withdrawn in place of Samu Castillejo and Ismael Bennacer.

Ibrahimovic was presented with a golden opportunity to level with seven minutes to go as Anguissa shanked a clearance that seemed to put him in behind, though the touch of Milan’s No.11 let him down and Ospina was able to collect.

There was a hugely controversial moment in the final minute of the game as Kessie thumped a ball into the net for what Milan believed was a last gasp equaliser following a chaotic ricochet inside the box. There were scenes of delirium including Pioli running down the touchline, but the goal was chalked off for offside against Giroud, and we still have no idea why.