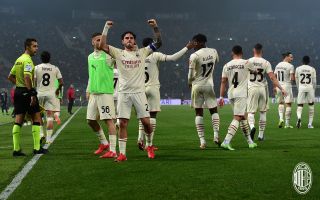 AC Milan left it late but they finally managed to overcome nine-man Bologna at the Stadio Renato dall’Ara on Saturday night, winning 3-2 in the end.

Everything was looking rosy for Milan when Rafael Leao scored with a deflected shot and the home side received their first red card of the night as Soumaoro hauled down Rade Krunic, with Davide Calabria doubling the advantage before the break.

Nonetheless, the home side roared back and scored a quickfire double after the break through a Zlatan Ibrahimovic own-goal and a Musa Barrow strike, before Soriano saw red for a nasty late stamp on Fode Ballo-Toure.

Just as it looked like two valuable points were going to be dropped, Ismael Bennacer put Milan back into the lead inside the final ten minutes before Ibrahimovic netted to put some gloss on the scoreline.

The win puts the Rossoneri top of the table at least until tomorrow afternoon when Napoli face Roma, and they can also watch Inter against Juventus with some peace of mind too.

Head coach Stefano Pioli made two changes to the starting line-up compared to the midweek defeat against Porto as he battled nine different absences. Zlatan Ibrahimovic and Samu Castillejo each got their first starts of the season coming in for Olivier Giroud and Alexis Saelemaekers respectively.

The home side started brighter as Milan struggled to get into the game and were guilty of giving possession away cheaply in their own half on a few occasions, and Ciprian Tatarusanu was called into action in the sixth minute, making an easy save to deny Hickey’s curling effort.

Bologna continued to have the better of the early exchanges and Milan got away with a poorly defended corner in the 14th minute with Tatarusanu crowded out and Arnautovic thankfully heading wide at the far post.

There was an awkward moment for Skorupski in the Bologna goal as he came flying off his line and managed to beat Leao to a ball in behind, recovering in time to see the Portuguese winger lace a shot well over and wide.

The first goal of the game, despite all the early pressure, went to Milan. A fantastic pass from Ibrahimovic released Leao in behind the Bologna defence and he steadied himself before firing a shot that took a deflection off Medel who tried to block and nestled inside the near post with Skorupski rooted to his line.

There was a big moment not long after the opening goal as a red card was given to Soumaoro, who hauled down Krunic as the Bosnian was seemingly chasing a lost cause and was deemed to be the last man.

Ibrahimovic had a chance to double the advantage three minutes before the half hour mark as a cross was clipped to the far post where Ballo-Toure headed it back into the danger zone and the Swede couldn’t quite find the power to head past Skorupski.

Ten minutes before the break Milan did double their advantage and it came from full-back Davide Calabria. A cross was stood up to the far post by Ballo-Toure and found its way to Krunic whose first time hit back into the box deflected into the path of the onrushing Calabria, who stepped up and hammered the loose ball into the roof of the net via a deflection.

Two changes were made by Pioli at the break as Alexis Saelemaekers and Tiemoue Bakayoko came on in place of Castillejo – who took a knock in the closing stages of the half – and Tonali.

The first chance of the second half saw Bologna halve the deficit and it came thanks to a helping hand from their visitors. A corner was whipped towards the near post where Bakayoko missed his headed clearance and the ball deflected in off Ibrahimovic to make it 2-1.

Moments later, it was 2-2. A ball in behind from Soriano was latched onto by Barrow who had got the better of Calabria and he finished inside the near post past the onrushing Tatarusanu to draw the scores level and compound a nightmare start to the first half.

However there was yet another big moment in the game as Bologna received their second red card of the game. As Ballo-Toure crossed the ball Soriano followed through with his studs on the ankle of the Senegal international and VAR rightly dismissed him.

Pioli made a change before the resulting free-kick could be taken as Krunic made way for Olivier Giroud, with a 4-4-2 the formation changed to.

The game understandably then went to a battle of attack and defence, with the home side making a triple change to try and solidify, presenting Milan with a wall of defenders to try and break down which they struggled to do.

Skorupski made an excellent save with 15 minutes left on the clock as a cross from Bennacer was headed towards the bottom corner by Giroud, and not long after he safely gathered a shot from the Algerian who was on his own 25 yards out.

Bologna had a chance to get themselves what would have been a miraculous lead, with Arnautovic collecting a clever reverse pass but seeing his shot saved by Tatarusanu from a narrow angle, and the Romanian saved a header from the corner.

As the minutes ticked by, Milan somehow found a way to break down a resolute Rossoblu defence. Bakayoko darted past his man to the byline and saw his cross diverted to the edge of the box where Bennacer was waiting to volley into the bottom corner with a precise and controlled effort.

As the clock struck 90 minutes a fourth goal was added and it came through Ibrahimovic. The striker found some space on the edge of the box to open his body up and curl a precise shot inside the far post and get his second of the young season.