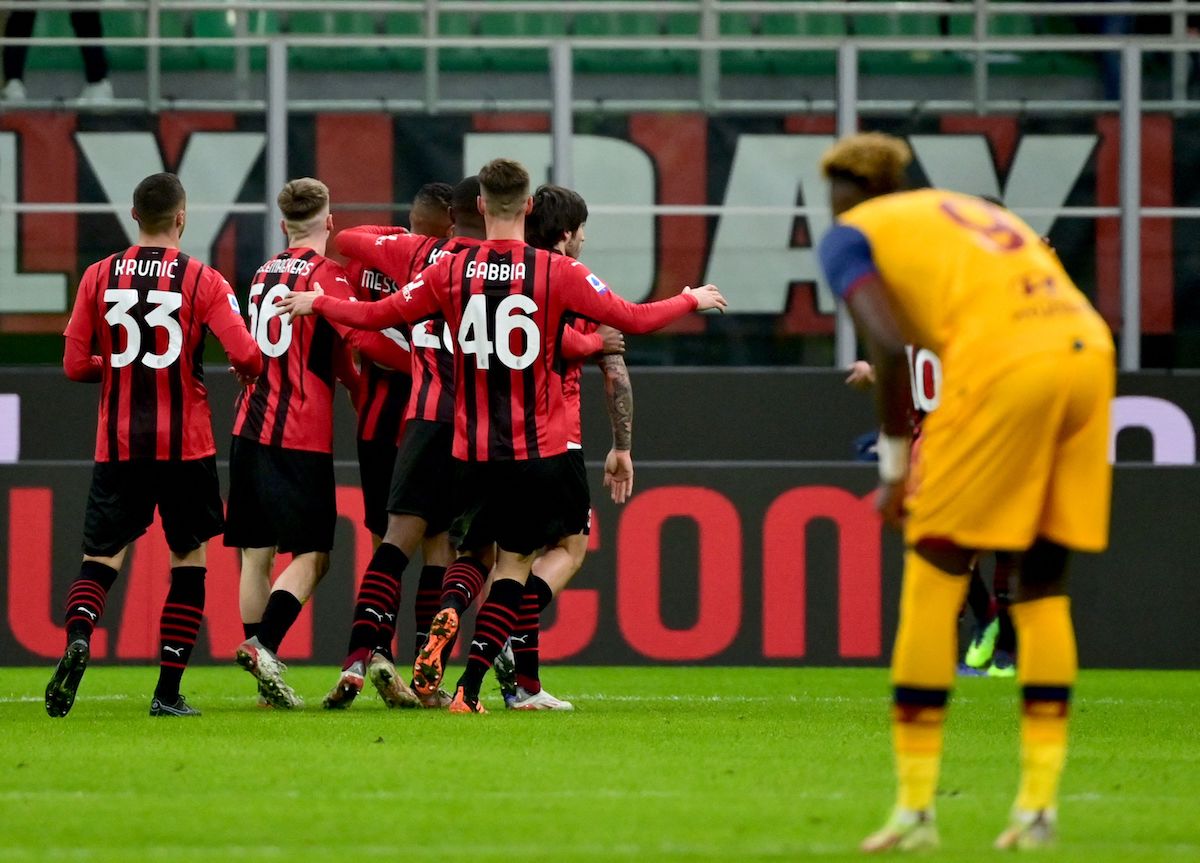 AC Milan began 2022 in the right way as they recorded an impressive 3-1 victory over Roma at San Siro despite a Covid crisis in the days prior to the game.

The Rossoneri raced out to a two-goal lead in the opening stages of the first half as a penalty was awarded for a handball by Tammy Abraham that was despatched by Olivier Giroud and then Junior Messias seized a rebound after Giroud hit the post to fire Milan two ahead.

Roma did get a goal back before the break as Abraham went some way towards repaying his earlier lapse in judgement by smartly flicking a low shot past Mike Maignan, but Karsdorp’s red card and Rafael Leao’s late goal off the bench ensured a comfortable win.

Zlatan Ibrahimovic did miss a late penalty that would have really added some gloss to the scoreline, yet the Diavolo made sure that they took advantage of Inter not playing to move one point behind them.

Milan’s preparation for the game was incredibly disrupted, meaning Pioli was forced to go with a makeshift XI. The defensive trio of Davide Calabria, Fikayo Tomori and Alessio Romagnoli missed out due to Covid-19 while Ismael Bennacer and Franck Kessie are on international duty and Simon Kjaer is out for the rest of the season. Ante Rebic and Rafael Leao came back into the squad but were not deemed fit enough to start.

Milan were not far away from taking an early lead after some good pressure, and it would have been a belter from the stand-in captain Theo Hernandez as a corner was cleared to him on the edge of the box and his half-volley drew an excellent save from Patricio.

Drama followed as the referee was called to review a handball on Tammy Abraham from that Theo shot and he rightly awarded the spot kick, which Olivier Giroud took the responsibility of despatching and did so with aplomb, sending the Roma keeper the wrong way.

In the 17th minute, the lead was doubled as the Rossoneri continued to capitalise on some sloppy errors from the away side. This time a poor pass towards Patricio from Ibanez was seized by the onrushing Giroud who hit the post from a very tight angle after beating the Portuguese stopper, but Messias was on hand to convert the rebound with a composed finish inside the far corner.

Despite having a two-goal advantage, there was still the feeling that Milan had to remain sharp given the patchwork nature of their defence, and Zaniolo provided a reminder of their threat as he sprang the offside trap due to Gabbia’s positioning being awry, but his shot from a narrow angle was saved by Maignan’s legs.

Milan went back to providing the greater threat just before the half-hour mark as Giroud saw a shot blocked following neat interplay, then Messias turned a first time near-post effort wide from Florenzi’s feed and finally Theo shot comfortably over despite finding space around 25 yards out.

Maignan made an incredible save five minutes before the interval to keep the score at 2-0 as Zaniolo let fly from distance and it glanced the head of Abraham, forcing the Frenchman to re-adjust and palm wide. However, Abraham would not be denied moments later as a corner was cleared but fired back into a dangerous area and this time the deflection from the Englishman wrong-footed Maignan.

There was a flare-up on the touchline in the 44th minute that all seemed to stem from Krunic going down inside the Roma box and staying down injured with the away side not kicking the ball out. Things again got heated not long after as Saelemaekers and Karsdorp squared up, with Chiffi losing control of the game a bit.

Milan had the first two chances of the second half and both were not far away from re-establishing the two-goal cushion. The first saw Krunic try to dribble instead of shooting deep inside the box after a Messias cut-back fell to him, while Brahim Diaz then rattled the bar with a shot from outside the box with Patricio beaten.

Abraham could have had a double and drawn the scores level after receiving the ball from Mkhitaryan, turning and firing towards the far corner but Maignan got down very well to palm it for a corner. The former Lille man was again in inspired form to keep out a first time shot from Mkhitaryan on the edge of the box that was whizzing inside the near post.

Pioli noticed that his side were starting to sit back and invite pressure, so he made a double change in the 64th minute as Krunic and Saelemaekers made way for Tiemoue Bakayoko and Rafael Leao.

Brahim Diaz had a big chance to get his first goal since September when Giroud was the unlikely supplier of a beautiful cross to the Spaniard deep in the box and he took a touch before bending his shot wide of the far post. Moments later, Messias cut inside and fired over with Milan’s press causing issues.

Roma’s hopes of securing parity were dealt a big blow as Karsdorp got a second yellow card for clipping Theo Hernandez down just before he surged into the box with 74 minutes on the clock.

From the resulting free-kick it was so very close to being 3-1 in favour of the Rossoneri with Florenzi’s whipped cross/shot striking the point where the far post meets the crossbar, and after that Zlatan Ibrahimovic and Andrea Conti came on for Giroud and Florenzi.

Inside the last 10 minutes, Milan got the third goal their pressure had been threatening. A ball up to Ibrahimovic was chested down brilliantly by the Swede into the path of fellow substitute Leao whose headed first touch put him through on goal and he sat Patricio down with a lovely finish.

There was one last late bit of drama as Gianluca Mancini saw a second yellow for hauling Leao down in the box and there was a chance to make it an even more emphatic win, though Ibrahimovic saw his spot kick saved. 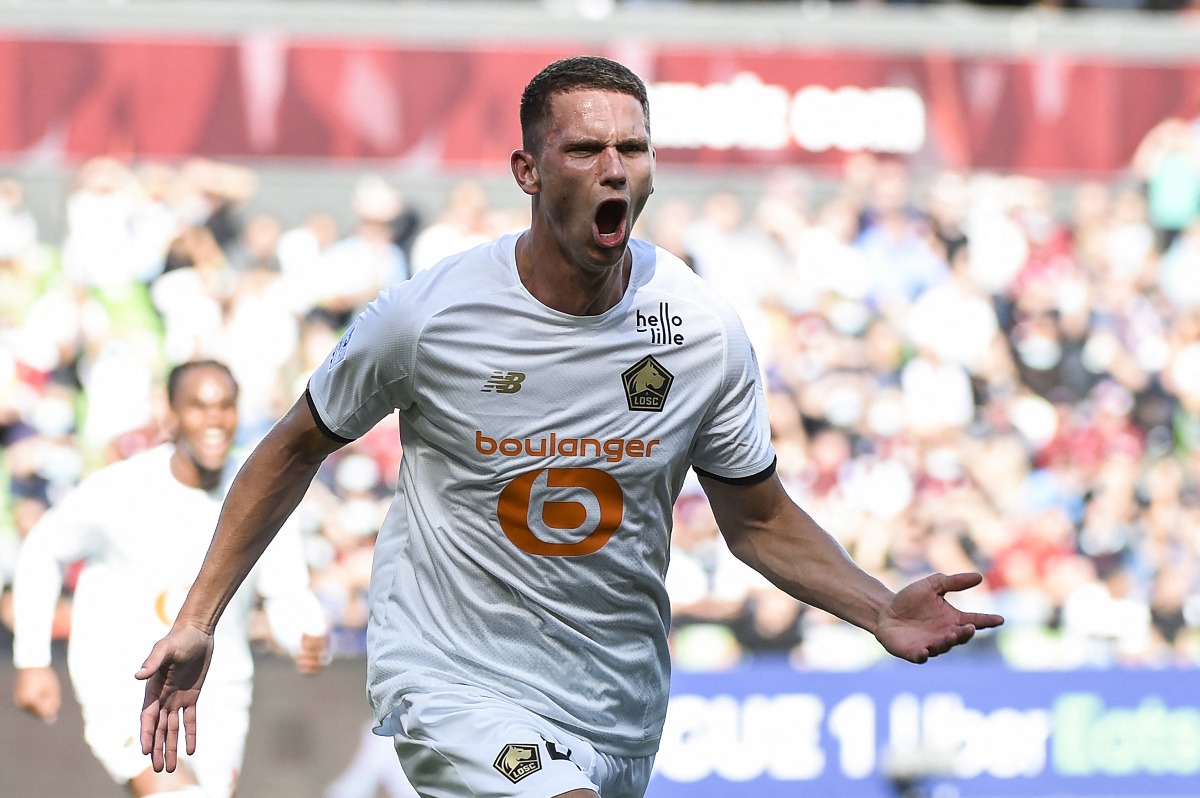